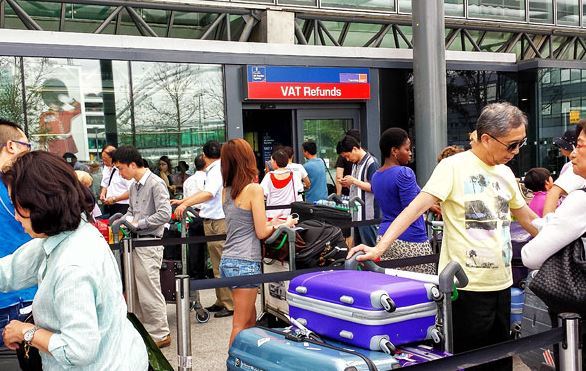 International spend growth in the UK has slowed, and following a year of political unrest and economic decline in key spending nations, total Tax Free spend in the UK dropped for the first time in 2014, down 3%.

However, these factors did not impact on top European competitors. Global Blue figures reveal France saw growth of 8% in 2014 and Italy was unaffected with 0% change year on year. These figures prove that the UK needs to find solutions to barriers that are hindering UK tourism and the economic opportunity these visitors bring.

Gordon Clark, Head of Commercial of UK and Ireland at Global Blue, said:  “The decline in international spend in 2014 while France and Italy remained unaffected should sound alarm bells.”

He continued: “action must be taken to facilitate visitors‘ journeys and drive the economic potential they bring while here. Tourism VAT, the visa application process, airport capacity and Tax Free shopping solutions have been on the agenda lacking progress for too long and it is vital the Government takes the necessary steps now before the UK loses out further to European competitors.”

In turn, the retail tourism specialist is asking the new Government to agree a 5% VAT rate on visitor accommodation and attractions.

The British Hospitality Association states that a reduction would increase revenue to HM Treasury by £529mover the first five years and £4.4bn over the first decade.

The UK is one of only four remaining EU member states without a reduced Tourism VAT rate. Tourism is also the UK‘s sixth largest export-earner and the only export subject to VAT.

A tourism VAT cut will stimulate growth in tourism and the wider UK economy significantly.

UK China Visa Alliance estimates that the UK loses up to £1.2bn annually from Chinese tourists as they choose to visit our European neighbours instead.

This loss of tourism is increased by the limited capacity at UK airports for visa applications, resulting in travellers choosing to land in other European destinations.

Gavin Hayes, Director, Let Britain Fly, said: “If the Government is serious about securing long-term economic growth then it must get on and make a swift decision on airport expansion.

The fact is we trade up to 20 times more with countries where we have a direct air link and by value 40% of our exports go by air, so airport expansion is fundamental to growing our trade and exports, particularly to new markets like Brazil and China.”

Last year, the Home Office accepted the proposal from the UKCVA Alliance for the launch of a pilot of a new UK-Irish Chinese visa agreement that sees the creation of a one-stop shop with Belgium to allow Chinese travellers to apply for both a Schengen and UK visa at the same time.

However, Belgium issues only a small number of visitor visas in China each year (16,000 compared with 390,000 UK visitor visas in 2014) so there is still significant need to push roll out in larger Schengen countries to put the UK on the same playing field as France.

While Tax Free Shopping has since significantly boosted UK tourism, the current system leaves tourists in long refund queues at our airports. The need to digitise Tax Free shopping in the UK, following the pilots in France, Italy and Austria has been encouraged by many major retailers and the Government will need to push approval from the Cabinet office to get the tender started so that the UK doesn‘t fall behind European neighbours.