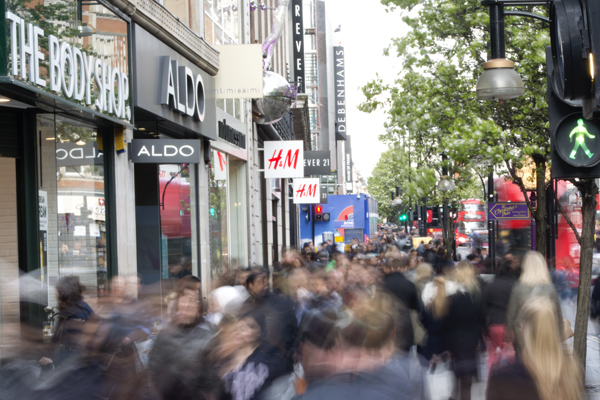 Retail sales growth in the UK slowed dramatically last month, with industry analysts blaming the wet weather rather than the general apprehension surrounding the EU referendum.

According to the latest Retail Sales Monitor Report released today, produced by KPMG and British Retail Consortium (BRC), retail sales were down by 0.5 per cent on a like-for-like basis from June last year, when they increased by 1.8 per cent from 2014.

The report also indicated that total sales only rose 0.2 per cent, compared to a 2.9 per cent increase in June 2015.

“The month outturn was predominantly driven by a decline in sales in the fashion categories and isn‘t a surprise given that June 2015 saw record growth in clothing and footwear,” BRC chief executive Helen Dickinson said.

“Looking across the last three months, food has held its ground with a better performance than non-food sales, which has seen its lowest growth since April 2012, largely due to fashion combined with a slowdown in furniture.”

“As consumer attention shifted indoors to escape autumnal downpours, furniture and home accessories bounced back in the month, with bigger ticket items proving relatively resilient in the days immediately following the EU referendum,” he said.

“With May sunshine a distant memory, however, summer wardrobes remained bare as sales of women‘s fashion and footwear plummeted following one of the wettest and dullest starts to a UK summer since records began.

“Elsewhere, Euro 2016 kicked things into gear a bit for the grocers, with sales improving 0.8 per cent in the three months April-June.

“However, the decline on a like-for-like basis suggests food and drink sales continue to be dragged down by the deflationary tide in the sector.”

However, Visa‘s UK Consumer Spending Index said high street spend dipped 1.3 per cent in June compared with the same month last year, and put it down to shoppers feeling appehensive from the uncertainty caused by the Brexit vote.

But industry analysts believe it is too early to assess the EU referendum’s impact on retail.

“While the ramifications from the Brexit vote may well affect consumer confidence, retailers will be hoping the long-promised heatwave and potential stay at home holidays will be enough to drive shoppers back to the high-streets over the months ahead,” McCorquodale said.

Dickinson insisted that British retailers must “remain open for business”.

“The EU referendum vote has not changed their relentless pursuit of delivering for customers day in, day out or their investment in meeting the needs of fundamental changes in the way people shop, driven by digital and technology,” she said.

“Despite the fall in the pound, the time it takes for any input price increases to translate into higher shop prices will depend on a combination of factors including further changes in the pound, commodity prices and the challenge for retailers to move pricing given the intensity of competition.

“So, there won‘t be any instant shocks as any changes would take time to feed through.”