The Lancashire based supermarket Booths has reported ballooning losses for its last full year as damage from storm Desmond continues to hits its margins.

According to the retailer, repairs from damaged stores caused by 2015’s storm Desmond, competition, higher rental costs and wages were all contributing factors towards it growing losses.

The news could spell trouble for potential buyers, following a  shock announcement last month that Booths was placing itself on the market, marking the first time in its 170 year history that it could be run by someone outside of the Booths family.

Dubbed the “Waitrose of the North”, Booths is reportedly asking for between £130 million and £150 million.

The eponymous Booth family have owned and run the chain for five generations and still hold 96 per cent of the company, with the remaining four owned by staff.

The sale comes during a turbulent year for Booths, when its 22-year chief executive Chris Dee stepped down in May before undergoing a financial review for allegedly breaching its loan terms. 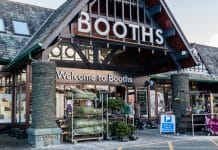