// Quiz issued two profit warnings earlier in the year, and a 97% drop in pre-tax profits in its full-year report

Quiz has seen a drop in shares after it warned about the challenging conditions it faced over summer with fewer people visiting its shops.

In a statement published today ahead of its AGM, the fashion retailer’s non-executive chairman Peter Cowgill said group revenues for the financial year to date were “broadly in line with the same period last year”.

During this time, Quiz noted a drop in in-store footfall despite seeing sales growth through its ecommerce arm.

While Cowgill warned that trading conditions were set to remain difficult, he had faith the business’s online focus would help boost profits.

“The challenging trading conditions reported at the time of the group’s announcement on 11 June 2019 have persisted over the summer months,” Cowgill said.

“Consistent with the widely reported conditions on the UK high street, the business has experienced a reduction in store footfall during the Period compared to the previous year when the group experienced particularly strong demand.”

He added: “Whilst trading conditions are expected to remain difficult, the board continues to believe that, through the strength of Quiz’s flexible business model and increasing online focus, the group can return to sustainable profitable growth in the medium term.”

The update comes after Quiz posted a 97 per cent drop in pre-tax profits in its full-year report that was published last month.

Full-year revenue grew by 12 per cent to £130.8 million which Quiz said had been driven by sales growth across all channels.

Quiz is slated to reveal its half-year trading update for the six months to September 30 in October. 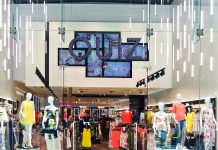 Burberry and Cartier among nominees at Walpole Awards for Excellence