Electricals retail group Dixons Retail has today reported a five per cent fall in like-for-like (LFL) trading for the first half of its financial year after an improvement in UK sales during the second quarter.

Total profit before tax for the Currys and PC World owner dropped to just 2.4 million in the 24 weeks to October 15th 2011, down from £11.4 million over the same period last year, but compared to many of its competitors its performance remains resilient.

In recent months loss-making rival Comet was finally sold by Kesa Electricals but for just £2 and US invader to the market Best Buy announced that it was abandoning its out-of-town Big Box stores due to poor trading.

Underlying pre-tax losses for Dixons reached £25.3 million and gross margins fell 0.6 per cent year-on-year but a continued growth in its Nordic operations and a slight recovery in UK performance in Q2 are signs of optimism for the group.

John Browett CEO of Dixons commented: “Our focus on building a service-led business model is differentiating our offer for customers and suppliers. In what remains a challenging environment, the pace and impact of improvements in our operating model is driving outperformance versus our competitors and market share gains.

“While we remain cautious about the economic outlook for the second half of the year, we are well positioned and remain focused on delivering world-class value, choice and service for customers.”

UK & Ireland trading was down ten per cent LFL in the first 13 weeks of the half but improved to a decline of just five per cent in the finial 12 weeks, while sales at its stores in the Nordic countries increased six per cent in the second quarter.

Online sales, an area of substantial growth for most retailers at present, remain a concern for the Dixons management however with pure play e-commerce trading falling 16 per cent over the first half.

“Dixon‘s sales show resilience in a really tough market. The group has been working really hard to modernise and adapt over the past three years and this has left it in good stead to capitalise as Comet, Best Buy and Argos have stumbled,” explained Matt Piner, Lead Consultant at analyst firm Conlumino.

Piner argues that much still needs to be done by the retailer if it is to boost its profitability however, and observes that this will remain difficult with little cash for investments.

Its net debt was reduced by over £70 million to £143.2 million over the half and the group has implemented £60 million worth of cost reductions this year as part of a £150 million three-year plan.

“The pureplay division, which includes the Dixons website, needs new impetus, as it is considerably underperforming, Piner added.

“Longer term there also remain questions over the use of the Currys/PC World branding and particularly whether the ‘PC World‘ name remains relevant in today‘s market.

“Dixons will be hoping that the disarray facing its major rivals will afford it the time and space to address these issues and to keep taking share until the market stabilises.” 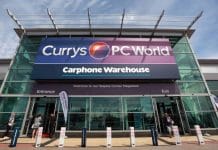