On a total basis, sales climbed 4.4 per cent on last year, buoyed by a particularly solid performance across homewares and big-ticket items, according to the British Retail Consortium (BRC)-KPMG Retail Sales Monitor.

Clothing sales also saw a boost over the period thanks to dry though cold weather while non-food also reported a strong performance.

“Whilst one shouldn‘t read too much into one month‘s figures, February‘s data will provide a much needed fillip to retailers‘ confidence levels,” David McCorquodale, Head of Retail at KPMG commented.

“Against all expectations, retail sales rose this month to achieve the strongest underlying sales growth for three years.

“This good overall growth has been achieved despite a sluggish set of numbers from the food and drink sector, where recent events may have caused consumers to change their buying habits within the meat sector.”

Online sales surged 10.9 per cent on last year and BRC Director General Helen Dickinson believes that the continued momentum established at the start of the year must be maintained with the help of the Government.

Calling on George Osborne to back investment in the retail sector, Dickinson said: “This month‘s Budget gives the Government a great opportunity to act to secure real and lasting revival from what could be no more than a short-lived lift.

“Retail is central to generating the growth and jobs so critical to the UK‘s economic recovery but weak consumer confidence is the real and present obstacle.

“Consumers need a Budget that leaves them with more money in their pockets and the confidence to spend it and retailers with the means to invest.

“I hope the Chancellor seizes the moment.” 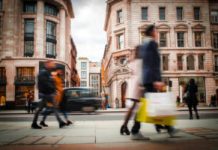