On a total basis, sales increased 3.7 per cent in March, according to the British Retail Consortium (BRC)-KPMG Retail Sales Monitor and, adjusting for Shop Price Index inflation at 1.4% last month, total retail sales values grew 2.3 per cent in real terms.

Growth is inflated as a result of the timing of Easter, which fell in March last year and both clothing and footwear lines suffered as demand cooled, though the results are cause for optimism given the poor weather conditions in recent months which contrast starkly with last year‘s heatwave.

Helen Dickinson, Director General, British Retail Consortium, said: “This is a positive result, which rounds off a first quarter of cautious optimism for many retailers.

“Easter fell in March this year but April in 2012, which helps this year‘s figures, especially for items which tend to sell well over the long weekend like food and homewares.

“But even if we strip out the data for the last week of March, performances are encouraging, considering the weather impact.

“2013 has got off to an encouraging start for the market as a whole. Retailers are now hoping for a boost in consumer confidence and the general mood to lift performance across all, not just some sectors, as we head into the second quarter.

“Getting a bit of sunshine, at long last, might help that along!” online sales jumped 6.6 per cent compared with a year earlier, when they had risen by 13.9 per cent while food LFLs rose 2.5 per cent over the period.

Sales of food and drink over the Easter period increased while there was also a “welcome rise” in house-related spend over the break, explained Head of Retail at KPMG David McCorquodale.

He went on: “Easter distortions aside, the three-month average figures paint a positive picture and show the highest like-for-like sales increases since December 2009.

“On the back of strong January and February results, this may be the beginning of a positive trend and will be welcomed by many retailers.

“With Easter falling early this year, the April sales comparatives will be negatively affected but it is hoped that the positive bounce of the first quarter of 2013 can continue to be felt across the country, buoyed by the opening of new shopping centres in cities such as Leeds.” 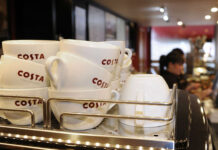