According to a survey by savvyinsight, a fifth of shoppers leave back to school shopping for their kids until the final week before school starts. Based on 282 shoppers, 55% were most concerned about buying new school shoes, and buying school uniform following closely behind with 49%.

Brandwatch analysed over 246k conversations regarding school uniform across social media for the past month, the breakdown reveals that BHS leads the share of online mentions (26%) however these were largely attached to a competition BHS promoted to win £100 worth of uniform. Closely following was John Lewis (22%) but was mostly down to a news story associated with them stocking a hijab in the school uniform section. Meanwhile Tesco were the highest ranking supermarket with the largest of all supermarket school uniform chat (20%) with Asda following closely with 16%. Aldi had the most chat from men as well as John Lewis and M&S and BHS were most talked about by women.

Currently the latest research shows that parents seem to be favouring supermarkets such as Aldi, Asda and Tesco instead of high street stores. With lower cost and quality as good, if not better than in other stores, the price difference is the main factor. For example, Aldi are selling a blouse for £1.50 in their £4 complete school uniform whereas John Lewis sell the same item for £8.

Retail analyst with Conlumino Neil Saunders said “Years ago, high street retailers like Marks and Spencer and BHS had the generic school uniform market sewn up. “Now they‘re being punished by the big grocers, and cannot sell at the high prices they used to. He also mentioned that due to back to school being a major purchasing occasion, parents would also buy other items such as stationery, lunch boxes, sports equipment also from supermarkets as grocers stock these items as well.

An article by the Guardian about a poverty inquiry revealed that parents are increasingly struggling to pay for their children‘s school uniform, equipment and lunches. The last official survey of the cost of schooling, in 2007, found the average spend on school-related items amounted to £1,195 per student in secondary schools and £684 in primary schools. Due to the market shifting, shoppers feel more inclined to buy the same school items for less money, which they can now purchase whilst doing their food shop. 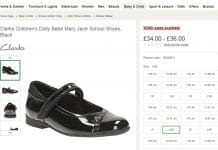