Tim Martin, founder and chairman of J D Wetherspoon, has hit out at the UK‘s tax system claiming it favours supermarkets over pubs.

The pub chain, which runs more than 900 pubs in the UK, announced today that like-for-like sales increased by just 2.8% in the twelve weeks to 18 January, slowing to around 2% in December and even “further in the last fortnight”. Martin described bar sales over the festive period as “flat” but noted that food sales have continued to rise.

In the year to date (25 weeks to 18 January) total sales are up 9.1%. Reportedly, however, “gross margins are under pressure as a result of increased price competition from supermarkets”.

This follows news on Monday that Conviviality Retail, owners of the Bargain Booze brand, which has nearly 600 stores across the UK, increased pre-tax profits by 46.7% to £3.2m in the half year to October 26. Christmas sales were also up 2.6% on the previous year, all suggestive of the changes in drinkers‘ habits.

The current plight of the pub trade is well-known. In August last year, research suggested pubs were closing at a rate of 31 a week. While this was down from a peak of 52 closures per week in the period from January to June 2009, it is still indicative of the long-term decline of this Great British institution.

“This situation reflects the dire need for the pub industry to campaign for equal tax treatment for pubs and supermarkets,” said Martin. “It is certain that the current wave of pub closures, which continues at a high level, will accelerate when economic growth slows or reverses. The main reason behind this trend is not that people prefer to drink at home but relates to the huge and growing price differential between pubs and supermarkets. This differential has been created and increased by the fact that business rates per pint are far higher in pubs and that supermarkets pay no VAT in respect of food, whereas pubs pay 20%.”

Wetherspoons, named after a teetotal geography teacher of Martin‘s during his childhood in New Zealand, also noted the detrimental effect of “the continuing imposition of stealth taxes, such as the late-night levy and the reduced allowances for gaming machine income” on the UK pub trade.

The differential has also been stimulated by supermarkets‘ practice of using alcoholic beverages as ‘loss leaders‘ to stimulate trade generally, although laws came into effect in April last year to clamp down on this practice. A minimum price per unit of alcohol has also been debated by politicians. 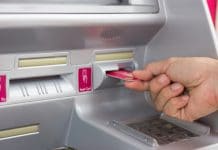 Card payments expected to overtake cash for first time in 2018