Following the end of the Mike Jeffries era, who served as Abercrombie & Fitch‘s controversial CEO since 1992, the fast fashion retailer is finally doing something about its identity crisis: putting an end to “sexualised marketing”.

This will be across marketing materials including in-store photos, gift cards and shopping bags, the company explained in a statement on Friday. Instead of shirtless males and babes in bikinis, the customer will now be at the centre of the business.

Jeffries was notorious for disliking unattractive or overweight employees, having implemented a “Look Policy” for workers at Abercrombie, and sister brand Hollister. The Policy banned French-tip manicures, certain hair-styling products and moustaches. It’s the company at blame for a 2008 US Supreme Court case in which job applicant Samantha Elauf was the subject of religious discrimination. Elauf had worn a hijab to a job interview, violating the Policy because it was black and considered to be headwear, in the same sense as a hat or a cap. In this instance, a rating of one out of three was given for “appearance and sense of style” and Elauf was turned down. Since then, Abercrombie has adjusted its Look Policy to make room for headscarves and black clothing.

Abercrombie & Fitch workers, instead of models, will now be referred to as “brand representatives”. Extreme makeup and excessive jewellery still may not be worn, but the rules are slightly more relaxed in an attempt to keep the focus on selling, and not appearance.

The former teen favourite has been struggling to revive sales of its namesake and Hollister brands. Its logo-centric clothing is not as on trend, as consumers flock to British brands like Jack Wills and Superdry for their preppy fashion fix, and H&M, Zara and Forever 21 for cheaper versions of Abercrombie‘s silhouettes.

Since Jeffries‘ departure, the retailer has been trying to re-position itself, a necessity given that net income for its fiscal year 2014 was down to $54m from $237m in 2013. It has a high level discounting which suggests that product has been going wrong somewhere. 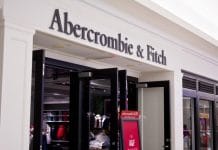