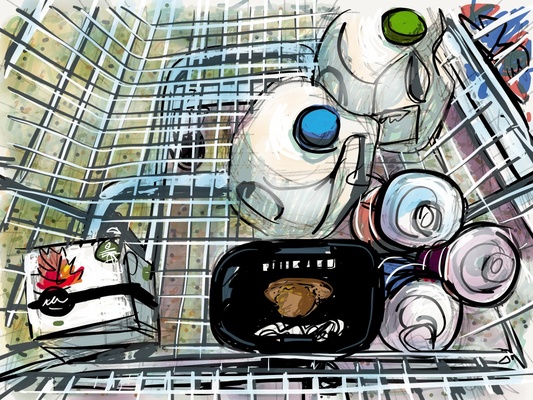 Towards the end of last month, German discounter Aldi said it hoped to open 60 stores in 2015, making it larger than Sainsbury‘s, Morrisons and Tesco combined. Just last week, budget supermarket Lidl, and Aldi‘s direct competitor, announced that it too, will expand with 60 stores (in Ireland and Northern Ireland).

Primary expansion plans could see the discounters battling it out, leaving the Big Four supermarkets lagging behind.

Aldi isn‘t concentrating solely on the UK, but it is also eyeing up the States where its US counterpart Walmart has struggled to rule the supermarket scene, with customers complaining about the retailer‘s empty shelves and lack of fresh food.

Walmart had $12bn worth of online sales in 2014, while it also aimed to appeal to budget shoppers with its ‘Savings Catcher‘ comparison shopping app which launched in August.

Aldi aims to dominate the US by adding to its 36 stores in Chicago and 150 in the suburbs. Compared to Walmart‘s 13.4% ranking, Aldi is estimated at 6%, making it the fifth biggest in the US but still behind supergiant Walmart.

In order to compete in the UK, Aldi has said that it is looking to test online grocery sales, as ecommerce is a primary focus for time poor consumers. The German chain also intends to push its stores in South and Western Australia.

Lidl will open 15 new Northern Ireland stores in 2015, just as Northern Ireland‘s current leading supermarket Tesco, closes 43 stores across the UK. The increased store count will mean Lidl has 50 stores there, making it the largest supermarket in the area.

Similar to Aldi, Lidl will also push further into the US. The company has a new corporate office based outside of Washington DC and is reportedly purchasing a $56.6m building in Virginia.

As both German grocery chains set their sights on expansion, their prices are creating higher consumer expectations.

200 shops and 7,500 jobs are at risk, with Tesco and Morrisons having closed 43 and 33 stores respectively, affecting an estimated 2,500 jobs. Sainsbury‘s has also had to scrap 40 future projects.

These figures are worlds away from the German retailers, which are growing in today‘s economy rather than having to resize under the pressure.