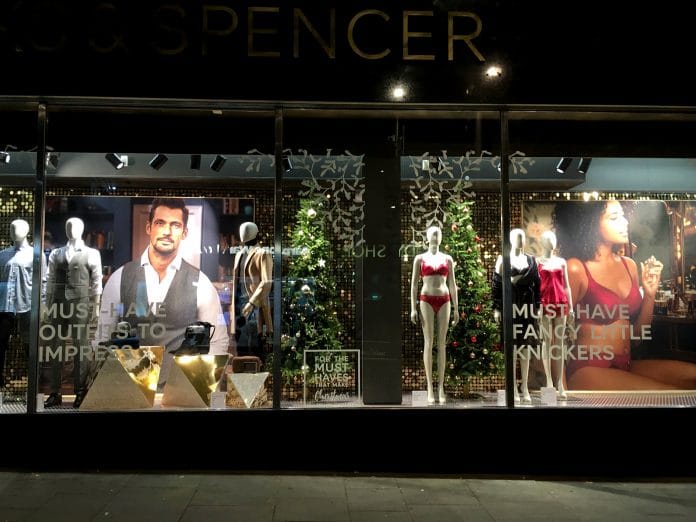 David Gandy, the model featured in Marks & Spencer’s window display that is now the centre of a sexism row, has weighed in on the debate.

Yesterday Gandy tweeted an image of himself in underwear sold by M&S, poking fun at the uproar over the allegedly sexist advert.

“If any men want any ‘must have fancy knickers’ for Christmas. Then I may know just where to shop,” he said.

This comes after an image of a window display in M&S’s Nottingham store went viral when shopper Fran Bailey branded it “grotesque” in a Facebook post to the Feminist Friends Nottingham group.

Bailey argued that this juxtaposition encourages the “normalisation of damaging gender stereotypes” and suggests women are obsessed with “fancy little knickers”.

What a great way to just completely miss the point. But then again M&S hasn’t been doing so well nowadays with a reported 75%drop in profits earlier this year .So hopefully there’s some relief now that this outrage will draw in some more middle aged white men who’re equally dense

Gandy defended his post when a user tweeted that he had missed the point.

“Not missing the point at all. Just making fun of it, as many people are getting their knickers in a twist about it,” he said.

“Oh FYI, the sales of my line are very much up and have been for the last four years running. Its [sic] doing very very well. Tnks [sic] for asking.”

He followed this up with a second tweet featuring a still of him in M&S’ advert wearing rubber gloves: “Im [sic] outraged that M&S had me wearing ‘must have fancy little washing up gloves’ to do the washing up! Have we not learnt anything over the last 35 years. We all have dishwashers!”

Im outraged that M&S had me wearing 'must have fancy little washing up gloves" to do the washing up! Have we not learnt anything over the last 35 years. We all have dishwashers! pic.twitter.com/Eo9cveghZZ

The retailer also responded to the accusations yesterday.

“M&S sells more underwear, in more shapes, sizes and styles, than any other retailer, especially at Christmas,” it said.

“We’ve highlighted one combination in our windows, which are part of a wider campaign that features a large variety of must-have Christmas moments, from David Gandy washing up in an M&S suit through to families snuggling up in our matching PJs.”