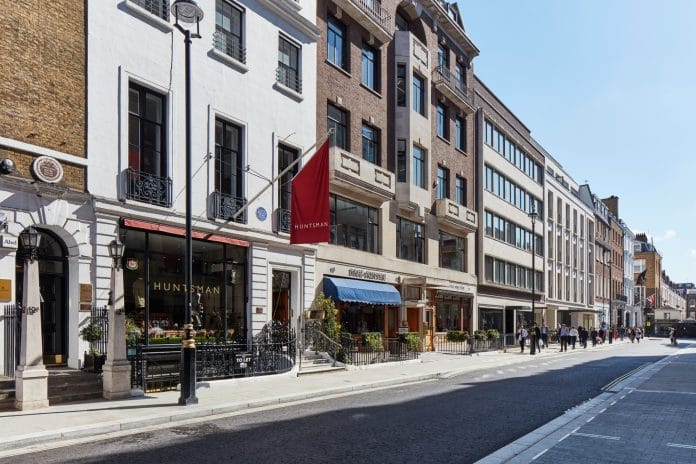 There’s no doubt that the average person has heard a thing or two about the Savile Row.

Over the years, the famed shopping street – located within London’s prime Mayfair neighbourhood – has attracted tourists, customers and most importantly, tailors.

Originally named after the famous Lady Dorothy Savile, Savile Row began forming during the 1730s and was a part of the vast Burlington Estate.

Today, it’s best known for its bespoke tailor retailers assembled along a small street. It has featured in countless TV shows and Hollywood films, such as the recent blockbuster Kingsman films.

Savile Row is situated just off Regent Street. It sits in between Maddox Street at one end, and Burlington Gardens and Vigo street at the other end.

It’s also just a five minute walk from Oxford Street, the most popular shopping street in the UK and one of the busiest in the world.

Julian Stocks, chief executive of The Pollen Estate – the firm which oversees premium office spaces and retail outlets, one of which is Savile Row – believes it’s “the finest street in the world for tailoring”.

“Every high street in the land is relatively similar with the same brands these days, possibly Bond Street is different,” he told Retail Gazette.

“But with Savile Row, we’ve got a really different street with a particular kind of user, mixed in with others.”

Suit prices can range from £2500 to £30,000 and customers range from elite to those who’ve been saving for months or years for a new suit. Past and present clientele include the likes of Winston Churchill, Charlie Chaplin, Tom Cruise, Michael Caine,and  members of the Royal Family, particularly Prince Harry whose wedding day suit was made by Savile Row tailor Dege & Skinner.

Stocks tells Retail Gazette of his ambitions to further improve footfall for Savile Row. He said he wants to “improve footfall in two areas, one is physical footfall, the other is online footfall”.

“We have a raft of initiatives, from improving significantly the public realm, through to a variety of marketing events both collaborating with all tailors on the row or individually with one-off tailors on the row planned for the next couple of years,” he said.

From street parties and events around the Chelsea Flower Show to collaborations with other brands that are synergistic with the Savile Row brand, Stocks said that to attract more footfall, “it’s not one particular thing, it’s a number of different things”.

He also noted the lack of social media use at The Pollen Estate, which he believes will improve once the company introduces a Savile Row website. Stocks hopes this initiative will push online Instagram stories, which will simplify a customers’ inquiry.

“I think the combination of all those things will improve footfall on the street and online,” he said.

Due to the fact that Savile Row is in a prime location, it means the retailers in the surrounding areas can benefit from the influx of tourists that come in each year. Some tourists visit the location simply because Savile Row is home to the Apple Corps office, where The Beatles once played on the roof.

“The people who buy suits or clothing from Savile Row may well be the sort of people who go to the Royal Academy, which is just down the road,” Stocks added.

“They may be the sort of people who purchase fine art from stores in Mayfair. This particular part of Mayfair is the heart of that luxury retail experience.

“We’re in a good place because of all the brands around us.”

With a doubt, the high street has had its fair share of struggles in recent years – especially last year, which saw the worst trading since the 2008 recession. Stocks told Retail Gazette that Savile Row has only suffered one administration – Hardy Amies – which collapsed in January for the second time in just over a decade.

Stocks said the English dressmaker, which was known for tailoring for the Queen, has “been through different hands over the years” which may have led to its administration.

“The picture is mixed across the different tailors, in terms of how they’ve been performing through the retail conundrums,” Stocks reflected.

He also emphasised that the Savile Row retailers succeeding in revenue and footfall are those that invest in multichannel.

“They have tailoring on Savile Row in their store, but also they’re selling things online on their website, they’ve got maybe stores around the world,” Stocks explained.

“Gieves & Hawkes would be a good example of that, so are Huntsman. They haven’t been as badly impacted as much of the normal high street retailers in the UK.”

Stocks concluded: “We don’t want to be the same as everybody else, we want to keep the differentiators.”