Yet again the ‘two-nation‘ trend is evident in the UK grocery market, as figures today show discounters Aldi & Lidl and upmarket chain Waitrose are all outperforming their rivals.

While the top four supermarket chains – Tesco, Asda, Sainsbury‘s & Morrisons – could each only muster sales growth of just three per cent of less in the 12 weeks to May 13th 2012, Aldi and Lidl posted double digits increases of 25.4 per cent and 11.3 per cent respectively.

The latest data from research firm Kantar Worldpanel shows that the overall grocery market grew just 3.1 per cent over the quarterly period, and in fact declined one per cent over the last four weeks, making the performance of the discounters, and Waitrose, which saw sales rise seven per cent over the period, all the more impressive.

Over the same 12 weeks last year the market grew five per cent year-on-year, however this period had the advantage of surprisingly good weather and the Royal Wedding to boost sales.

Edward Garner, Director at Kantar Worldpanel, commented: “On the face of it, the declines in market growth might seem alarming but there are exceptional factors.

“Easter and the Royal Wedding helped year-on-year growth soar to a remarkable 7.6 per cent in the four weeks leading up to May 15 2011 – a hint of what‘s to come over the Jubilee weekend.

“Comparing the current figures with the same period two years ago, the four week growth stands at 6.5 per cent. This is actually in line with long-term trends and shows 2011 as the anomaly.”

Tesco still have a commanding 30.8 per cent slice of the grocery market, although this is down slightly from 31.1 per cent over the same period in 2011, and they are followed by Asda with a 17.4 per cent slice, Sainsbury‘s with 16.5 per cent and Morrisons with 11.9 per cent.

Both Aldi & Lidl hold record shares of 2.8 per cent each, while the Waitrose tranche has jumped slightly to 4.5 per cent, just behind The Co-operative which has 6.5 per cent.

Garner added: “The ongoing strong performances of Aldi and Lidl have led some commentators to believe that consumers are deserting conventional stores for the discount sector.

“However, a more realistic picture of shopper behaviour shows that many consumers are continuing to do their main shopping trip in their usual store, but spending the remainder of their household budget on the discounters.” 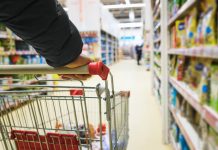