Like-for-like (LFL) retail sales values increased by 1.5 per cent in September compared with the same period last year while on a total basis, sales rose 3.4 per cent against a 2.5 per cent rise a year earlier.

According to the British Retail Consortium (BRC)- KPMG Retail Sales Monitor, homewares and furniture sales picked up despite continuing difficulties across the market while online sales improved on August‘s record low during the Olympic Games though generally remained weaker than this year‘s trend.

Stephen Robertson, Director General of the BRC, said of the data: “After a poor summer for sales, this is a return to growth rates we‘ve come to regard as relatively acceptable in these relentlessly tough times.

“The improvement has come from the weather and a change in the mindset of some customers.”

Food & drink were also affected by the unpredictable weather with food and grocery sales at their peak at the start of the month though, with food & drink inflation at 3.1 per cent in September, sales growth remained low in volume terms.

“Customers are still cautious but less fearful than they were. The squeeze on disposable incomes has eased for some and, along with lots of discounts, left them feeling it‘s time to stop postponing spending.

“Retailers will be hoping this modest boost strengthens as Christmas approaches.”

Last month, consumer confidence rose one point to -28, its highest for 15 months representing a shift in how shoppers feel about their own and the general economic situation, relieving pressure on the high street ahead of the busiest time of the year for the retail sector.

“The news that like-for-like sales rebounded to achieve the highest increase seen in 2012 may give many renewed heart as they enter the most important trading period of the year.

“With the rent paid for the last quarter before Christmas and most seasonal orders now made, the bets for the final quarter have been placed. Retailers will now be hoping that the consumer finds some confidence for 2013 to drive sales for the next three months.

“If that doesn‘t happen there‘s a real risk that the retailers will be forced to discount their seasonal margins away.” 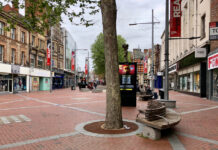