Fashion retailer H&M has today committed to signing a fire and building safety agreement in Bangladesh as the country‘s Government committed to raising the minimum wage for factory workers.

Last month, an eight-storey garment factory in Dhaka, whichhoused suppliers from UK retailers including Primark and Matalan, collapsed, killing more than 1,000 people and tens of thousands of workers have since taken to the streets to protest poor working conditions in the country.

Mohammad Sohel Rana, the owner of the collapsed Rana Plaza building, was arrested and charged with causing deaths by negligence and a number of retailers have committed to improving standards in the wake of the tragedy.

H&M is the latest to do so, pledging to support the Accord on Fire and Building Safety in Bangladesh, aimed at creating “a safe and sustainable” garment industry by implementing reasonable health & safety measures.

In 2011, H&M introduced a scheme to increase fire safety awareness among suppliers and their employees and said that it plays “an active role in improving fire safety in Bangladeshi garment factories”, though this latest move hopes to heighten awareness of the issue.

Designed to run for a five-year period, the Accord is a further commitment within the Swedish retailer‘s existing sustainability scheme.

H&M requires that all supplier factories undertake electrical assessments with the retailer offering to share the cost of this, though it noted that “a broad coalition of brands” was required to work with Government, industry associations and trade unions in order to ensure improvements are far-reaching.

Head of Sustainability at H&M Helena Helmersson said: “Fire and building safety are extremely important issues for us and we put a lot of effort and resources within this area.

“H&M has for many years taken the lead to improve and secure the safety of the workers in the garment industry. With this commitment we can now influence even more in this issue.

“We hope for a broad coalition of signatures in order for the agreement to work effectively on ground.

“By being on site, put demands on manufacturers and work for continuous improvements, we can slowly but surely contribute to lasting changes.”

Fast fashion retailer Primark has joined H&M in committing to the agreement, which will see all signatories commit to financing and implementing a joint fire and building safety programme which will include safety inspections and safety training.

While the retailer noted that its Ethical Trade team has worked for a number of years with authorities in Bangladesh, it pledged to fully support the latest initiative.

A Primark spokesman said: “Primark is very pleased to support this initiative.

“The company has consistently believed that the collaborative approach facilitated through this agreement was the most likely initiative to bring effective and sustainable change for the better to the Bangladeshi garment industry.” 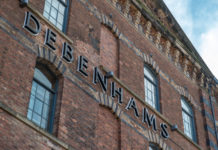 Are ‘aspirational‘ and ethical fashion labels the future?