Supermarket Sainsbury‘s has seen like-for-like (LFL) sales in its first quarter edge up 0.7 per cent on last year, results released today reveal, as the grocer put in what it called a “solid performance in a challenging market”.

Over the period, the retailer strengthened its convenience offering which “remains a strong driver for growth” as sales at the arm jumped nearly 20 per cent year-on-year.

Opening 19 convenience stores over the quarter, the grocer also refurbished 13 and plans to open two stores per week over the remainder of the year.

Sainsbury‘s now serves some 23 million customers per week and its online grocery business grew at more than 16 per cent year-on-year, though this is a slowdown from the nearly 20 per cent recorded in the previous quarter.

Sainsbury‘s CEO Justin King highlighted the hard work of stadd in driving the sound performance, adding: “This has been a solid performance in what continues to be a tough consumer environment.

“During the quarter we lapped some of our strongest performance of last year, culminating in the Queen?s Diamond Jubilee, and have extended our track record to 34 quarters of like-for-like growth.”

Own brand sales are also helping drive growth as its relaunched ‘By Sainsbury‘s‘ range saw sales jump nearly seven per cent while its ‘Taste the Difference‘ offering grew at over 10 per cent, reaching £1 billion of sales over the period.

Commenting on the importance of this strategy, Joseph Robinson, Lead Consultant at analyst firm Conlumino, said: “Sainsbury‘s is getting a number of things very right.

“Most notable has been investment into own-label architecture, which has afforded it authority to flex its offer in accordance to broadening consumer demands and capabilities.

“Indeed, both its premium Taste the Difference and mid-tier by Sainsbury‘s sub-brands achieved strong growth during this period.

“This private label investment has been complemented strongly by clever, targeted promotional activity, with its Brand Match scheme being supported by more creative campaigns such as ‘Feed Your Family‘ and targeted promotions such through Nectar and via coupon-at-till.

“Collectively, this well-aligned own label and promotional activity is somewhat insulating Sainsbury‘s in a climate where consumer loyalty is fickle and the hard discounters are excelling.”

General Merchandise continues to be a key area of focus in order to complement the grocer‘s food offer with non-food continuing to grow at twice the rate of food, with sales of kitchen electricals and cookware climbing 34 per cent and 23 per cent year-on-year respectively.

Looking ahead, King believes the chain is well-placed to maintain growth, commenting: “We expect the challenging economic environment to continue through this financial year.

“By helping our customers to Live Well For Less through our ongoing commitment to great quality own-brand products, Brand Match, competitive pricing and targeted promotions via Nectar and coupon-at-till, we are well positioned to continue to outperform the market.” 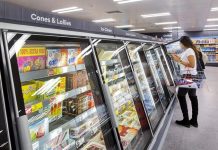