The Cambridge Satchel Company, the brainchild of the woman dubbed the ‘Ultimate Bag Lady‘, Julie Deane, is set to open a new flagship store in Covent Garden. Started in 2008 by Deane and her mother as a way to pay her children‘s school fees, the Satchel Co. now sells 3,500 satchels a week with sales of £13 million in 2013.

Originally based on a traditional and enduring ‘Oxford and Cambridge‘ design aimed at schoolchildren, the satchels were featured in the Guardian and shot to stardom in 2009. They soon became something of a cult item among young fashionistas, endorsed by celebrities such as Alexa Chung and involved in collaborations with fashion houses including Comme des GarÃ§ons.

Now, with £12 million raised with the backing of Index Ventures, Cambridge Satchels plans to open its third outlet on James Street in Covent Garden, a six-story flagship store located near to its existing store in Shorts Garden.

The Shorts Garden outlet began as a pop-up before becoming a permanent store, and the Satchel Co. also owns a shop in central Cambridge, where Deane first began her venture with a budget of only £600.

A spokesperson for the company said: “The shop opening is a real landmark in the company‘s history, we‘re thrilled to be setting up a home away from home in Seven Dials. The shop is a unique space and we‘re planning lots of exciting events for our customers.” It took over four months to turn the project into a reality, in close conjunction with architects Househam Henderson, and will represent “a real coming of age for the brand”.

Whilst the Company initially offered a basic collection of practical satchels, satchels are now available in a number of different sizes (from 11” to 15” as well as a ‘mini‘ model) and in a number of different colours after the release of the ‘Rainbow Collection‘, as well as a selection of eye-catching ‘Fluoros‘ designs. The Company has stayed true to its roots, however, offering an official ‘University of Cambridge‘ mini satchel in the university‘s signature ‘Light Blue‘, a nod to founder Deane‘s former position as a fellow of one of the university‘s oldest colleges, Gonville and Caius.

The secret to its success, according to Deane, is the enduring appeal of the bag to people of all ages, both men and women. It offers British classics as well as colourful twists to appeal to customers of all persuasions. It has received a string of awards and commendations that have helped increase the company‘s exposure, including entrepreneurial awards both internationally and in Britain.

The satchels are also available online (on the company‘s website and from Asos) and from a number of independent retailers located across the globe, including Harrods and Saks Fifth Avenue. 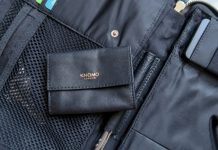