Carnaby‘s 13 streets are welcoming international retailers this winter, with the likes of Pharrell Williams‘ Billionaire Boys Club and A.P.C opening flagship stores on the estate.

Dubbed the ‘epicentre‘ of ‘Swinging London‘ in the 1960s, the prime style-spot continues to re-establish itself as a popular shopping destination attracting global businesses and retailers.

Just down the road, on 1 Marshall Street, Billionaire Boys Club will be joined by menswear retailer Oi Polloi, opening its first store outside of Manchester to mark 12 years strong in the industry. The brand recently featured in the news when eager customers queued for two nights outside the Manchester store in the hopes of purchasing a pair of rare ‘Ardwick Adidas‘ limited edition trainers, designed, in association with Adidas, by Oi Polloi owner Nigel Lawson. Set to open the doors to its two-storey 1,170sq ft London store in March 2015, Co-Founder Steve Sanderson has said, “Carnaby is the perfect location for our store with its mix of diverse, independent brands alongside larger flagship global brands in its 13 streets. The Marshall Street store will sell exclusive products with some brands only being available at the Oi Polloi Soho store.”

Lexington Street will be drawing in the Francophiles this December as French brand A.P.C, founded in 1987 by Mr Jean Touitou, launches its West End flagship store there, displaying its women‘s, men‘s, denim and accessories collection within its 1,120 sq ft location. Recently joining the stores are womenswear Dutch brand, SuperTrash, Swedish menswear store Our Legacy, Detroit‘s Shinola , Cubitts and Californian brand Nixon, which has a ‘customisation watch bar‘ at its first UK store.

Commenting on the popularity of the London location with worldwide retailers, Samantha Bain-Mollison, Portfolio Retail Strategist at Shaftesbury PLC, said: “All the above brands have selected a prime London location for their UK flagship stores and compliment the strong retail mix already in the 13 streets of Carnaby. The strong directional fashion brands will sit beside current stores such as Scotch & Soda, ELEVENPARIS, Replay and Monki and these contribute to the Carnaby destination” 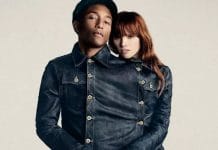