Respondents were asked to describe their shopping characteristics and were subsequently categorised into the following distinctive groups by researchers.

These particular shoppers hate Christmas shopping due to crowds, the monotonous festive music on loop and the cold.

They resign themselves to doing all of their Christmas purchases in one go rather than continuously heading to the stores and can be spotted carrying at least 15 bags of shopping and rolls upon rolls of wrapping paper underneath their arms.

Traditionally someone who leaves their shopping to the very last minute, these shoppers can be seen sprinting round department stores on Christmas Eve grabbing whatever they can find.

Not only is this consumer somewhat cheap, they also have a selective memory of what they were bought the previous year.

There are no limits to how little they will spend, with some even known to buy giftss from charity shops.

Those military shoppers who start planning their Christmas in July, have presents ready by August and all wrapped up and ready to be distributed by September.

This group of customers tend to continuously remind others that they have already done their shopping and are just waiting for the 1st December to put the tree up.

Half lazy, half environmentally friendly, the recycler will reuse old presents that they don‘t want. Often concealed in their bedroom, this consumer will have a drawer of gifts that they‘ve been given but don‘t want.

Most of the time these will consist of scented candles and toiletries.

These gifters are adamant on being nimble with their hands. The card will definitely be homemade and nine out of 10 times so will their present.

Also commonly referred to as the ‘bunger‘, the cop-out will get away without buying any presents purely by bunging a voucher or some money in a card.

In the gifting world, and especially at Christmas, this is seriously frowned upon. After all the Three Wise Men bought the Baby Jesus gold, frankincense and myrrh, not a £10 voucher for M&S.

Also not a fan of the crowded shops, the online wiz kid will do all their Christmas shopping online.

They are also the savviest of all the Christmas shoppers as they will use their online skills to find the best savings, deals and vouchers.

This particular type of shopper will spend more time worrying about the quality of the wrapping paper and the bow than the actual present inside.

In some extreme cases the wrapping paraphernalia will be worth more than the actual present.

(Remember: never judge a gift by its wrapping)

This is the worst type of gifter, someone who continuously and without fail, will always buy the wrong present. They buy bottles of wine for teetotallers, trays of chocolate for diabetics and have a particular penchant for the gifting the novelty jumper.

Everyone knows an example of this type of gifter. If you don‘t then unfortunately, it is probably you.

This year, Christmas lands on a Thursday and so there will be more trading days than usual, meaning more people will leave buying their gifts until the last minute as they wait to see if the sales start earlier. As a consequence, more consumers will be willing to pay a premium to get their purchases as close to Christmas as possible. 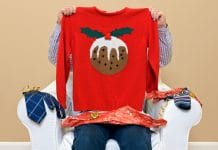 British consumers to spend £1bn on unwanted gifts this Christmas

Maximising the benefits of online reviews