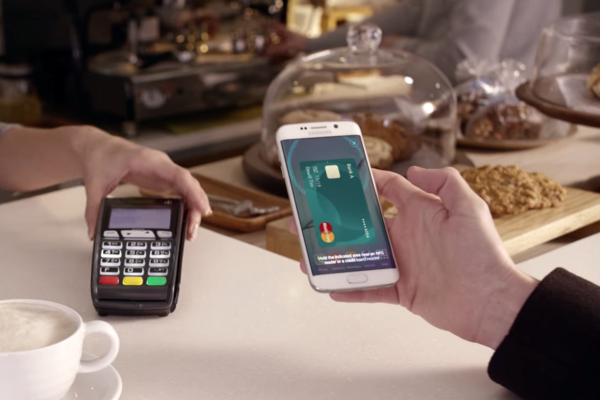 According to credit agency Moody‘s, Samsung Pay which launched in Korea yesterday, is set to give rivals Apple and Android Pay “a run for their money”.

Following Apple‘s launch of the competing facility last year, the mobile wallet service seeks to encourage shoppers to use their handsets rather than credit or debit cards when making in-store purchases.

The Apple and Android mobile payment systems only work in locations where NFC terminals are turned on. In comparison, Samsung Pay will be available for consumers to use even if the terminal is not NFC enabled. This will work via magnetic strip recognition.

Thomas Ko, Vice President of Samsung Pay, explained to the BBC “Rather than swiping the card, which normally transmits the data, we are using electronic signals [made by alternating current] through coils inside the phone to send the signal over.

“So from the machine’s perspective it is actually receiving the same amount of information that it would from a magnetic reader.”

Similar to Apple Pay, transaction limits are determined by local card associations. In the UK, the limit is £20 but this will be increased to £30 from 1st September.

A Spokesman for The UK Cards Association said there were no immediate plans to raise the limit, but added: “It‘s always kept under review. It‘s a balance between customer demand, the average spend in different settings and security. For us it‘s about making it available to as many customers as possible.” He further commented that the amount spent using contactless payment systems and the number of transactions trebled in 2014.

Last week, Samsung announced that the UK will be the first country in Europe to receive the Samsung Pay service. The date is yet to be confirmed, however it has been indicated that it will be in the “near future”.