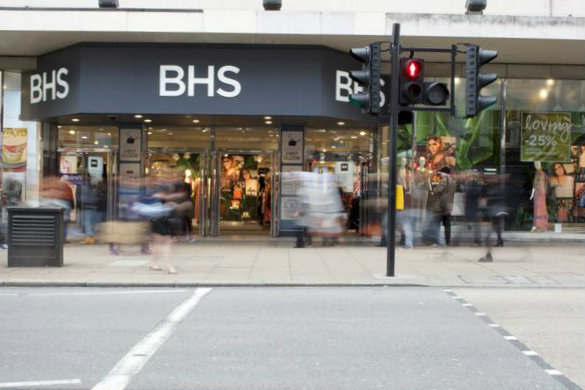 The Oxford St flagship store of collapsed retailer BHS shut its doors for the final time on the weekend, with the department store chain to disappear completely from high streets by next week.

The flagship in central London closed down on Saturday night after a sale that offered discounts of up to 80 per cent.

Although shoppers took advantage of it and left the store with bags of items, there was still stock left just as trading was about to conclude for the last time.

TV crews also appeared to film the store‘s final moments, attracting a crowd as they witnessed the shutters coming down for the last time.

The Oxford St outlet is one of 58 stores closing over the next week or so as administrators failed to find a new buyer and were left no choice but to end its 88-year history.

It is understood Polish firm Lubianiec Piechocki i Partnerzy has signed a lease on part of BHS‘ Oxford St premises to bring its Reserved fashion brand to the UK.

The former owners of BHS are currently being investigated by the Financial Reporting Council, the Insolvency Service, the Pensions Regulator, and prolific US law firm Jones Day.

They are also under consideration by the Serious Fraud Office for a criminal investigation.

This follows a parliamentary inquiry co-led by Frank Field MP and Ian Wright MP, who branded Sir Philip Green – BHS‘ owner from 2000 to 2015 – as the “unacceptable face of capitalism”.

Green controversially sold the retailer for £1 to Dominic Chappell, a former bankrupt with no retail experience.

BHS then fell into administration in April, costing thousands of jobs and racking up a pensions deficit of £571 million which could now stand at £717 million after a recent Bank of England interest rates cut.

Both Green and Chappell also extracted hundreds of millions in dividends from BHS before its collapse.

Persistent calls from prominent figures for Green to “write a cheque” from his own pocket have as yet been unsuccessful, although he said he would “sort it”.

Green’s knighthood is also under review.