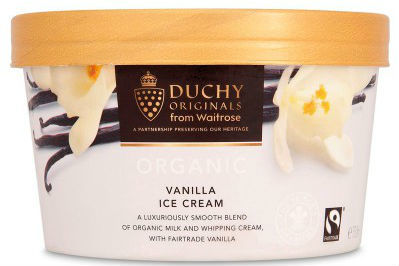 Prince Charles and Waitrose have been criticised by a leading health campaign group for the high levels of sugar in Duchy ice cream, sold exclusively at Waitrose.

The Action on Sugar campaign group has found that the brand of ice cream contains nearly twice as much sugar as some other leading brands, and have called on both Prince Charles and the retailer to follow the example of other brands and work to reduce the levels.

The study focused on the vast variations in sugar levels in similar goods aimed at children. Duchy Organic vanilla ice cream was discovered to have 84 per cent more sugar than Asda‘s own brand value range.

In March George Osbourne announced the sugar levy, aimed at tackling childhood obesity and reducing the level of sugar in big branded items.

This was enforced in August to much criticism from both manufacturers and health activists.

“At a stroke, he concentrated the mind of sugar-happy soft drink manufacturers seriously to consider reformulating their products to an acceptable level,” spokesman for the National Obesity Forum, and team member of Action on Sugar, Tam Fry said.

READ MORE: Sugar Levy: what difference will it make?

“As Action on Sugar‘s research shows, many food manufacturers got the message, too. All, and Prince Charles in particular, should now follow their lead. The added bonus is that they will have dramatically aided the health of millions of people, let alone the NHS.”

Waitrose responded saying that it was intended as an indulgent treat and not aimed at children.

A spokesperson said: “The sugar content is clearly labelled and we sell a range of vanilla ice creams with a significantly lower sugar content, which our customers can choose if they want a healthier option.

“Reducing sugar is a top priority and we have an extensive reformulation programme to achieve this, which has already included significantly reducing sugar in chilled juices, cereals, yoghurts, soups, cordials and fizzy drinks.”