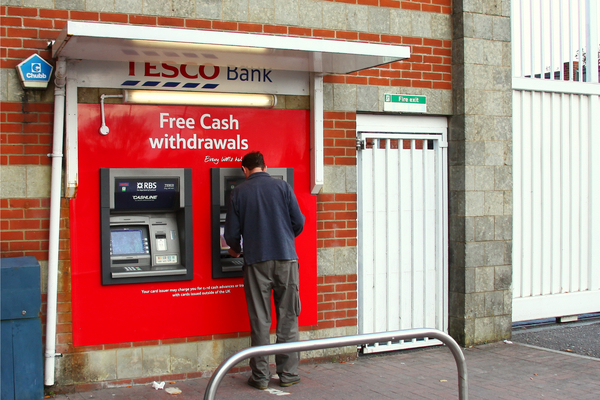 The future of free ATMs attached to shops is up in the air after retailers lost a key court battle over business rates bills on ATMs.

A recent legal ruling in the Upper Tribunal upheld a decision in 2013 that ATMs built into the front of a shop should have a separate business rates bill.

This means retailers’ looking to claim £200 million in rebates for past rates paid will no longer be possible.

In addition, they now face a whopping £206 million bill for the next five years under the business rates revaluation that came into effect at the start of this month.

As a result, small retailers and independent petrol forecourts may be forced to close ATMs or start charging for cash withdrawals.

The judgment was in relation to a case brought to the tribunal by a raft of retailers, including major supermarkets Sainsbury’s, Tesco and Co-op, as well as non-bank ATM operator Cardtronics Europe.

In 2013, the government decided to charge rates on “hole in the wall” ATMs, which saw bills sent to thousands of retailers in 2014 and backdated to the start of the last business rates regime in April 2010.

According to a recent freedom of information request by rents and rates specialists CVS, almost one in six – or more than 196,000 – current business rates appeals lodged with the Valuation Tribunal Service relate to cash machines.

CVS criticised the government’s move to charge rates on ATMs as a “stealth tax” and warned it could make access to cash much hard for many communities, given the rate of bank branch closures across the UK.

While ATMs attached to retailers are having to pay rates, the system does not apply to free-standing cash machines within stores.

However, it still affects thousands of hole-in-the-wall ATMs.

A spokesman for CVS said retailers are expected to lodge an appeal against the tribunal‘s recent ruling.

“Given the importance of the decision, both sides indicated that they would wish to appeal an adverse decision to the Court of Appeal. As such the battle looks set to rumble on,” he said.

“However, in the short term, there won’t be any respite in tax liabilities which is going to hit small retailers and forecourts the hardest.”

Association of Convenience Stores chief executive James Lowman said: “Sadly this ruling will make it harder for retailers to offer free-to-use cash machines that are accessible from the outside of their store.

“This will have wide ranging and damaging implications not just for convenience stores, but also for small businesses, markets and other services on high streets and in neighbourhoods where this is often the only local free source of cash.”

He added the ruling shows “what a mess the business rates system is in” following the recent revaluation.