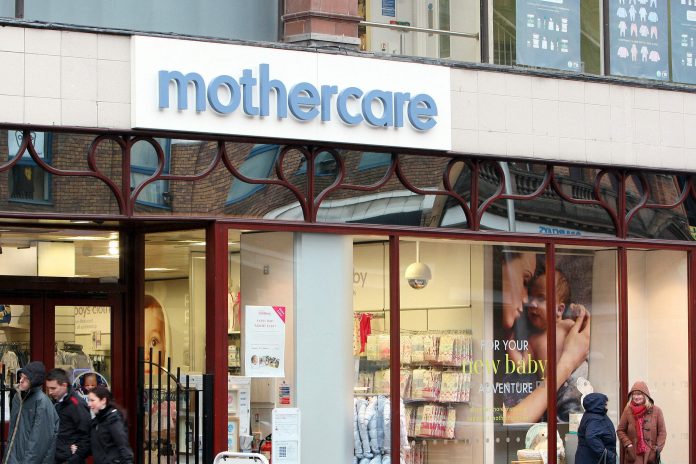 Mothercare has recorded an uptick of 1.9 per cent in UK like-for-like sales in its first quarter,  but a disappointing run in its Middle Eastern market caused a slump in its international sales.

The maternity retailer’s online sales in the UK for the 15 week period ending July also grew by 3.3 per cent.

However, its total sales in the country was lower than the same period last year, dipping 1.8 per cent, which Mothercare attributed to its ongoing store closure programme that is part of a turnaround strategy.

Meanwhile, international retail sales were down 8.3 per cent in constant currency and up 2.2 per cent in actual currency, driven by continued weakness in the Middle East.

Despite this, international online sales skyrocketed by 53 per cent in constant currency and 78 per cent in actual currency.

Mothercare’s retail space in the UK at the end of the quarter was reduced to 1.4 million sq ft, as expected, with 147 stores.

Internationally, it opened 26 stores and closed 43, ending the quarter with around 2.9 million sq ft across 1133 stores.

“We have continued to make progress in the UK during the period,” Mothercare chief executive Mark Newton-Jones said.

“We have seen customers respond well to our end of season sale, which we entered with less stock than last year, and are achieving a higher sell through rate.

“Whilst online sales recorded a lower growth, in contrast to higher sales growth in store, we don‘t believe this represents an underlying permanent shift in customer behaviour. We are about to launch our autumn ranges, but it remains uncertain how consumers will respond to inflation.

“In our international business, the challenging economic conditions in the Middle East continue and are impacting overall performance, and so the outlook remains volatile.

“We continue to export our learnings from the UK as our business improves here, to support our partners with the modernisation of their franchise businesses, and see further opportunities for growth both online and in stores.

Earlier this year, Mothercare announced plans to reduce its total UK store count to focus on key locations nationwide, which will act as specialist advice and service points to support online sales.

The turnaround efforts so far have helped return its UK market to health, with the group seeing its first underlying profit for six years in the final half of its fiscal year – with a surplus of £4.4 million.

However, the UK remained loss-making overall in the year, with underlying losses of £4.4 million, compared to losses of £6.4 million the previous year.