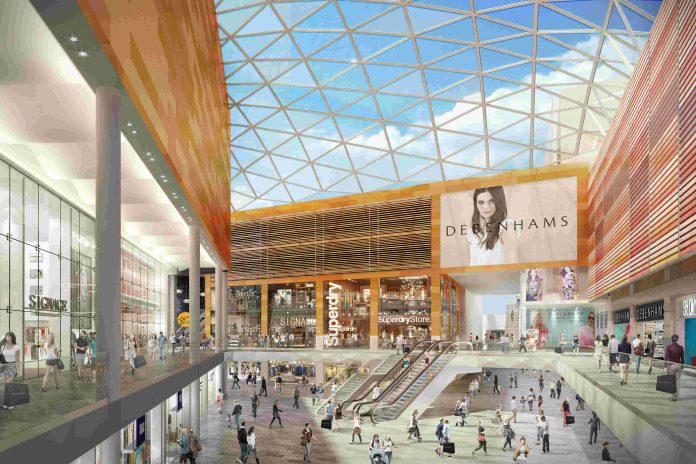 The expansion scheme at Intu Watford shopping centre reached a milestone recently when a ceremonial piece of concrete was laid on the roof of the extension at the topping out ceremony.

The ceremony is regarded as a builders’ tradition to mark a development’s highest point being reached.

Representatives from Intu and contractor Laing O’Rourke gathered to mark the progress of the shopping centre extension, which costs £180 million and will expand Intu Watford’s retail and leisure offer by 400,000sq ft.

Intu has signed up a multi-screen IMAX Cineworld cinema and 113,000sq ft Debenhams to anchor the new extension.

There will also be a Hollywood Bowl, 11 new restaurants and 13 more stores.

Once it opens in October, the town of Watford would be placed alongside the likes of Edinburgh and Bristol in CACI’s top 20 national retail destinations.

In addition, at a total of 1.4 million sq ft, Intu Watford will become one of the UK’s largest in-town shopping centres.

“Our plans will establish the centre both as a daytime and evening destination and drive what is already a busy and prosperous local economy, with 38 million visitors to Watford high street every year and 83 per cent of our customers drawn from the most affluent ABC1 socio-economic group.”