Game Digital has seen its shares jump despite revealing a slight dip in revenues, as it shifts its focus towards its Belong e-sports arenas.

In a trading update released today, the video game retailer said statutory revenues for the 52 weeks to July 28 were set to drop slightly from £782.9 million to around £780 million.

The business cautioned that its profits would continue to come under pressure as it negotiates its leases with landlords and struggles with a waning pre-owned market.

“We have made further progress in the second half of the year to right-size the UK retail business by reducing the cost base, whilst capitalising on all market opportunities to address the challenges and changes in the UK retail market,” chief executive Martyn Gibbs said.

“This review of costs will continue into the next financial year.”

Although Game is continuing to undergo a major restructure and reported a 25 per cent drop in profits in March this year, the retailer is shifting its focus away from its core retail offering to its e-sports gaming arena.

Earlier this year House of Fraser’s new owner Mike Ashley, who owns a 25 per cent stake in Game, invested £3.2 million in Games Belong arena’s with the view to hitting 100 arenas within three years.

The first opened in Westfield Stratford earlier this month, with a second due to open in Lakeside Thurrock in September, and some expected within Sports Direct stores.

Globaldata’s retail analyst Zoe Mills said: “Its Belong arenas remain a fraction of its overall business and while the retailer suggests that these experience centres are performing well, Game still needs greater expansion in the UK of this service to ensure that sales from its arenas bolster its declining retail business.

“Game must push ahead with further rollouts given the agreement allows for around 100 Belong arenas in Sports Direct stores.

“With Mike Ashley finally realising his department store ambitions with the purchase of House of Fraser, Game needs to ensure that Sport Direct’s commitment and attention to the partnership does not waver.”

Shares jumped eight per cent in morning trading following the news, though they have fallen significantly over the year. 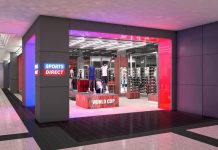