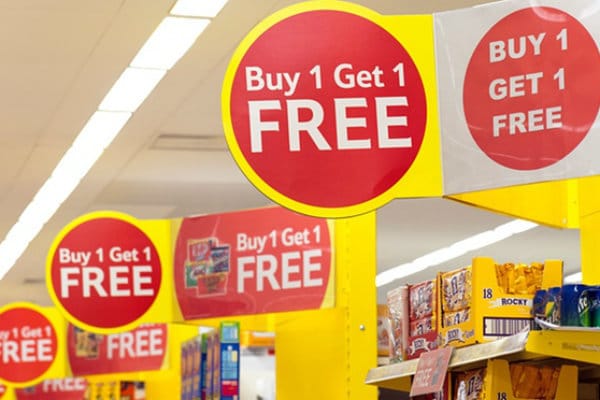 Whether it’s to increase demand or to offer consumers an incentive when launching a new item or product range, retailers are never far away from implementing the age-old marketing strategy of promotional pricing. But just how effective are these campaigns?

Two-for-one or buy-one-get-one-free deals, to deep discounts and even specials offered in conjunction with movie launches or cultural events are just some of the examples of promotional pricing strategies that retailers offer.

However, these businesses have to bear in mind that providing a discount should be recouped with sales increase, and calculations must be taken in order to evaluate the practicality and timing of the offer. For example, cultural holidays are a time when footfall is considerably high, especially during the Christmas period, and retailers often try to capitalise on heavy discounting with consumers who are likely to have the fear of missing out on a deal.

“Around key shopping dates such as Black Friday, Boxing Day and various January sales, we naturally see a spike in demand, with many retailers hoping to take advantage of this,” said Sander Roose, chief exeucitve of retail pricing specialist firm Omnia Retail.

However, Tryzens chief executive Andy Burton argued that the increasing pattern of consumers holding back on purchasing items as they wait for major holiday sales events was indicative that they were not “driven by fears of missing out on a bargain”.

“With more regular sales events like Black Friday, Cyber Monday and the January sales, many consumers may think that the item they want will be further discounted in the near future and may hold off on purchasing in the hope of deeper price cuts,” he told Retail Gazette.

“Slashing prices drives sales, but there’s no point if margins are squeezed to losses.”

Midlands Retail Forum vice chair Naeem Arif said Black Friday was an advantageous period for retailers because “sales typically have a lot of right ingredients for creating that sense of urgency – once it’s gone, it’s gone”.

Although Black Friday can cause sales numbers to surge, it also makes it increasingly likely for customers to return items they had bought during the sales period. High returns are often caused by impulse buys, when a customer realises they don’t actually need a particular item bought on sale and have a change of heart. For retailers, it’s expensive, represents lost sales, and damaged or opened inventory can take up extra staff time.

Burton said impulse buys made up for a “significant proportion of sales shopping” and “this is likely to have much higher return rates, contribute to increased costs for retailers and further hit profits”.

Although promotional pricing can lead to increased sales for retailers, it could also result in a brand being tarnished as heavy discounting can devalue its products, according to research by global payments provider Klarna.

The firm found that 25 per cent of consumers said they were “less likely to shop regularly with a retailer who always has sales on”, while 38 per cent said “constant sales make a brand look cheap and unfashionable”.

Retailers that heavily relied on promotional pricing to increase sales are the ones most likely to face these repercussions, especially the growing trend for consumers opting for experiential retail.

Kevin Edwards, from the global affiliate network Awin, said heavy discounting may be necessary sometimes but can ruin a brand longer term, especially if done frequently.

“It sends a clear signal to the consumer that the brand doesn’t understand the value of their own goods and services,” he told Retail Gazette.

“There’s also an element of consumers feeling ripped off if they have to pay full-price for products that are often and deeply discounted.”

It could be argued that retailers are in constant competition as to who can provide the best promotions, and this sense of panic to hit revenue targets can affect the bottom line significantly. Experts argue that if the retailers want to discount, they should do it in a way that allows them to compete.

“There’s also an element of consumers feeling ripped off if they have to pay full-price for products that are often and deeply discounted.”

As an example, Edge by Ascential senior analyst Chris Elliott refers to Debenhams and Marks & Spencer which have cited heavy discounting from competitors as one of the key reasons for their respective unsatisfactory sales performances. Meanwhile, the rise and rise of discount grocers Aldi and Lidl has prompted Big 4 rivals to introduce new budget ranges to compete. Tesco even went as far as launching a brand new discount retailer, Jack’s, to help them compete.

Gary Rohloff, managing director of payment services app Laybuy, said: “The legacy issue at large is that retailers often resort to staging a sale when panic to hit revenue targets sets in.

“Over time, this vicious cycle has been responsible for cheapening much loved brands and devaluing the reputations of so many beloved retailers on the UK’s high street.”

Rohloff also believes in the “domino effect” –  the notion that as soon as one retailer holds a sale during a busy shopping weekend, “its competitors tend to follow suit – an accumulation that has been so detrimental to the high street in recent times”.

Brand loyalty is another driver of sales. This is linked to experiential retail as customers who visit their favourite stores subliminally expect special treatment, such as further discounting via loyalty programmes.

“This can be simply offering money off or a % discount on the next purchase, within a specified time period. Or it could be offering nominal points that can be saved up for a discount in the future,” she told Retail Gazette.

Chris Baldwin, director of consumer promotions and loyalty at Sodexo Engage, believes retailers who provide free gifts as part of a loyalty programme have a better advantage.

“Consumers are far more likely to buy a product if they have an emotional connection to the brand than if they just see something discounted,” he said.

“Loyalty is what brands really need to aim for.

“Offering something tangible, like a free gift, is far more powerful than a simple discount, and also offers opportunities for further marketing and PR.”

However, Baldwin argues that retailers would be better off by “avoiding discounts altogether and instead find better ways to reward their customers for choosing them”.

“Even though value for money is important for customers, they value consistency and quality the most.”