// Aldi now plans to expand its store presence within the M25

Aldi has vowed to invest £1 billion in expanding its store estate within the M25 over the next two years, after posting record financial results.

The German discounter posted an 11 per cent increase in sales to £11.3 billion in the year to December 31.

However, its profits before tax fell 18 per cent to £182.2 million due to ongoing investments in its infrastructure and promotional pricing.

Aldi now plans to expand its store presence in greater London, or within the M25, from 45 stores to 100 stores by the end of 2025.

The grocer also plans to open a further 100 stores across the UK over the next two years.

The stores will be a mix of standard sized stores and its smaller “local” stores.

Stores in Blackheath, Watford and Sydenham have been confirmed.

“Whilst our expansion will continue to reach every part of the UK, we’re increasing our focus on London, where our market share is just 3.4 per cent, compared to 8.1 per cent nationally,” Aldi UK and Ireland chief executive Giles Hurley said.

“London shoppers regularly tell us they would switch to Aldi if there was one nearby, so there is clearly a significant growth opportunity for us in the capital.”

“For almost three decades we’ve proven that investment equals growth – investment in our infrastructure, our people and our prices.

“The commitment we have made to our customers to continue investing in the UK over the coming years remains as strong as ever.”

Aldi currently has 840 stores across the UK and Ireland. 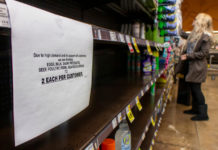