// This means customers can collect pawned items they had feared losing

// The deal does not include A&B’s 116 stores, which all shut without warning in September

Albemarle & Bond’s “pledge books” have been bought out by a rival pawnbroker, but its full store estate remains shut.

H&T said it had agreed to pay £8 million to buy the “pledge books” of Albemarle & Bond, which include thousands of short-term loans linked to customers’ pawned items.

The deal, to be finalised October 7, with H&T does not include A&B’s 116 stores, which all shut without warning in September.

“This is an exciting transaction and enables us to cement our position as the UK’s leading pawnbroker,” H&T chief executive John Nichols said.

“Our immediate focus is to do everything we can to support A&B’s customers.”

Daikokuya Holdings, the parent company of Albemarle & Bond, ended the business as concerns over losses were expected to increase after Brexit.

When Albemarle & Bond and its sister chain Herbert Brown stopped trading, customers were wondering whether they’d recover their belongings which were pawned for short-term cash.

About 400 staff were made redundant when the stores closed. 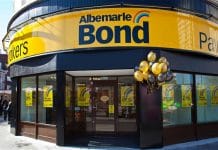