Lacoste has appointed Marco Dippe as the new chief executive of EMEA and global travel retail.

Dippe was previously responsible for the European region as chief executive of central and northern Europe.

He will join Lacoste’s global headquarters in Paris.

The former managing director of Hugo Boss, Marcus Meyer will be responsible for the European business.

Dippe has helped drive growth at Lacoste over the past three years through a repositioning in the European market.

His previous role saw him working at Nike, where he oversaw the integration of the textile, footwear and underwear areas.

Meanwhile, Meyer, who has also held roles at Geox and United Colours of Benetton, will join office on October 1. 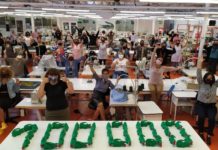