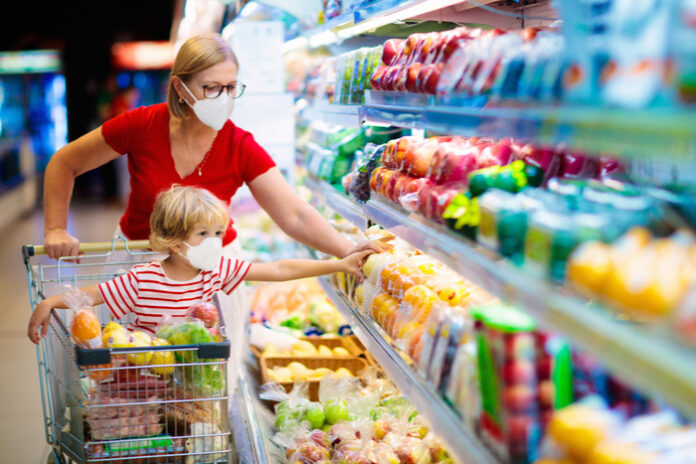 Shop assistants have said they fear abuse from customers over mandatory face coverings as police chiefs warn they should only be involved “as a last resort” if shoppers do not comply.

Yesterday the UK Government announced that from July 24, shoppers will be legally obliged to wear face coverings inside shops like supermarkets, although it is unclear whether this guidance also applies to other high street food businesses like cafes, bakeries and delis.

Rizwan Ahmed, a shop assistant at a small supermarket in Maida Vale, London, said most customers arrive without face coverings despite signs requesting they wear one.

“I’ve been telling everyone (to wear masks), but people don’t care now,” he told the PA news wire.

“Some people wear them, some don’t. Say we have 100 people pass through the shop, about 10 will be wearing a mask.”

He said having to enforce the new law will create a “difficult situation” for shop assistants, adding: “There could be trouble, because some customers mind.”

Victoria Szatmari, who manages a cafe in Maida Vale, said she believes “most” customers will be conscious about wearing a mask, but is “a little” worried about whether she will be expected to enforce it.

Supermarket assistant Holly, from Solihull, agreed the restriction is likely to cause tension between staff and customers.

“We have had people become very irate when we have had to limit purchases and remind them about the one-way system,” she said.

“So yes, I do think myself and the colleagues will get more abuse from members of the public. Especially our regulars who probably think we will let them off.”

She added the restriction is “too little too late” and the police do not have time to deal with shoplifters, let alone people failing to wear a mask.

Senior police officers said they were blindsided by the mandatory face covering announcement, with shoppers facing a £100 fine if they refuse to comply.

The National Police Chiefs’ Council (NPCC) chairman Martin Hewitt indicated that senior officers were “unaware that the announcement was to be made last night” but they had time to work on the measures before they come into effect.

“We will expect retailers to manage entry to their stores and compliance with the law while customers are inside, with police involvement as a last resort,” he said.

The Police Federation, representing rank-and-file officers, said it was “unrealistic and unfair” to expect them to patrol the aisles looking for people breaking the coronavirus regulations.

“Policing the wearing of face coverings in shops can’t be a priority because we simply don’t have the resources,” chairman John Apter said.

He added: “Only as this last resort should the police get involved.

“To expect my colleagues to be policing the supermarket aisles, looking for those shoppers not wearing a face covering, is unrealistic and unfair.”

Health Secretary Matt Hancock told MPs: “Should an individual without an exemption refuse to wear a face covering, a shop can refuse them entry and can call the police if people refuse to comply.

“The police have formal enforcement powers and can issue a fine.”

The Department for Health said it would keep the regulations “under review” and will “continue assessing if measures need to be put in place for other settings going forward” though has not clarified which settings are included initially.

According to their latest guidance, the public “should wear a face covering in enclosed public spaces where social distancing isn’t possible and where you will come into contact with people you do not normally meet.”

According to a YouGov poll on July 12, 38 per cent of people in the UK said they wore a face covering in public spaces – up from 13 per cent on May 1.

Helen Dickinson, chief executive of the British Retail Consortium, said she supported the restriction, but warned that retailers must not be responsible for enforcing it.

“With hundreds of incidents of violence and abuse directed at retail staff every day, we welcome the announcement that enforcement will be left to the authorities, rather than potentially putting hardworking retail colleagues in harm’s way,” she said.

Trade union Usdaw said the government’s announcement on face coverings “leaves many questions unanswered” and agreed enforcing the rule could become a “flashpoint” for abuse.

Usdaw general secretary Paddy Lillis said: “It is right to make the wearing of face coverings mandatory in shops, but there must now be clear and detailed guidance from the Government.

“We urge them to develop and agree that with Usdaw and retail employers, as we successfully did on joint safety guidance for the reopening of high street shops with the British Retail Consortium.”