Marks & Spencer has announced it will be closing 11 of its stores in France as it continues to have fresh and chilled food supply issues following Brexit.

The retailer has suffered over the Channel in recent months after European border restrictions left its Paris shops with empty shelves.

M&S has been holding talks with its French franchise partners after border controls following Brexit delayed lorries and left tons of food wasted.

READ MORE: Marks & Spencer could be forced to close its French stores

The forced retreat will come as a blow to M&S, which relaunched its French business exactly a decade ago.

At the time, its bosses hailed the return with the former chairman Lord Rose calling the previous retreat in 2001 tragic.

In July, M&S chairman Archie Norman told The Mail on Sunday that ‘Byzantine’ regulations meant only two-thirds of sandwiches were getting to stores and most of them only have a shelf life of 48 hours, so even short delays can make them unsellable.

The delays have affected food arriving in Britain from the Continent and consignments shipped to Northern Ireland.

These are expected to continue with checks already in force resulting in some goods, particularly chilled food and meats, not reaching stores.

The extension does not apply to goods passing from mainland Europe, which will be subject to even greater documentation demands from October 1. 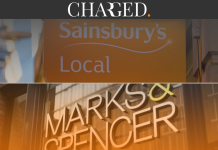