Marks & Spencer plans to scrap its best before dates from a range of fresh produce to cut down on food waste.

From this week, M&S will begin removing best before dates from the labels of more than 300 fruit and vegetable products – 85% of M&S’ produce offering.

Customers will instead be able to use their own judgement – rather than a pre-set date – to judge the freshness of food, which it hopes will prolong the life of produce and cut back on food waste.

But how will customers react? Retail expert Nelson Blackley says customers will be put in a worse position as they are being asked to take a gamble about how long products might be suitable and safe to eat.

“The current best before date on fruit and vegetables provides a clear and universal indication to both customers and staff of what produce is likely to be in best condition,” he says.

Blackley also points out that the move will “encourage additional handling of fruit and vegetables by dozens and dozens of individual consumers” which is not either operationally helpful or hygienic.”

He also fears that the initiative may not have the positive effect on food waste that M&S hopes for.

“It basically throws the responsibility onto the M&S shopper,” Blackley says, pointing out that many may err on the side of caution and ditch perfectly edible items.

“I would not be surprised to see an increase in their food waste levels as a result,” he adds.

However, WRAP director of collaboration and change Catherine David disagrees. “Removing dates on fresh fruit and veg can save the equivalent of 7 million shopping baskets of food being binned in our homes,” she says.

“This is something we’ve always done and since opening our first British stores in 1994. It helps to prolong shelf life,” the spokesperson explains.

In more recent times, other grocers have adopted this change with Tesco ditching the best before date on more than 100 fruit and vegetable products in 2018 and Morrisons removing use by dates from 90% of its own brand milk in January this year, encouraging customers to use the “sniff test” to decide if the product is fresh.

Good for shoppers and the planet

Retail expert and broadcaster Kate Hardcastle applauds these intiatives, which she believes will cut down on food waste.

“The missing part of the jigsaw is often the retailers and communications. The retailer has power in their voice and consumers place their trust and faith in them.

“So when a retailer confirms to consumers that they can use their sense rather than a set of dates which tend to make them nervous – it’s a good day for the environment, shoppers and retail,” she says.

However, Hardcastle says consumers should be given some form of guidance to judge the lifespan of products.

This is a sentiment that many Retail Gazette readers agree with. Although the vast majority of readers believe that retailers should follow M&S and scrap the best before date, some posted on LinkedIn to say they would like some other indicators of freshness, such as a ‘picked on’ or ‘packed on’ date on packaging. 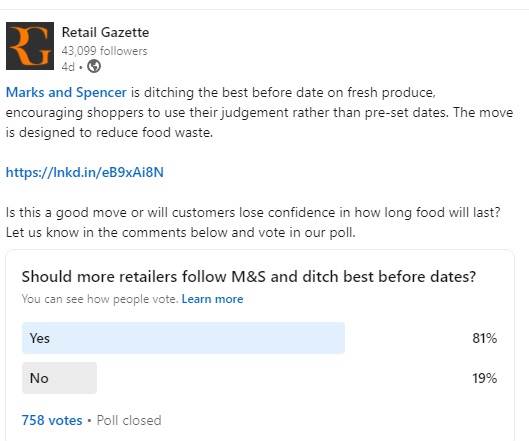 M&S has introduced a new code which store staff will use to ensure freshness and quality is maintained but this isn’t particularly useful for customers.

Lidl says it simply relies on customers to make decisions on their own preferences and judgement, a spokesperson said.

Encouraging customers to use their own judgement is one thing, but as Blackley points out that presents challenges when others are choosing produce for shoppers.

“How will this work with online orders with product picked instore?,” he questions. “Without any best before information, it would be a subjective view of the individual involved.”

Blackley describes it as an “in-store and online operational nightmare” which should be avoided if possible.

There may be practical challenges but ultimately best before dates are only a guide anyway. How many times have shoppers found items rotting or mouldy even though there are days left before its best before date?

Ultimately, the best way to guarantee freshness is through touch and smell. M&S should be applauded for this initiative and putting the power in the hand of consumers.