The UK‘s biggest retailer Tesco is to trial various groundbreaking interactive technological features at a number of its stores and online, it was confirmed today.

Using augmented reality (AR) technology, which employs webcams and mobile devices to make virtual images appear to be interacting with real-life surroundings, Tesco will allow its customers to view life-size projections of products before making a purchase.

Online this means consumers will be able to use their webcam to see over 40 3D products virtually appear in front of them wherever they are with the use of laptops or desktop computers, for example being able to spin a TV around to see connector points.

In-store, the new technology will allow customers to view more products than can be physically stocked within a shop, allowing them to check out heavy goods such as bulky electricals without them actually being there.

Although retailers have experimented with AR, such as Harrods with its interactive window display earlier this year, this new initiative, created for Tesco by Kishino AR, will be the first time a major UK retailer has invested so much in the fledgling technology.

A Tesco representative said: “This is a really exciting new technology which in this form is a relatively untapped opportunity in the UK.

“Thanks to our work with Kishino, augmented reality will allow customers to be closer to our product and interact in a way that has never previously been possible.”

The trial will see the technology installed at eight Tesco outlets, in Cheshunt, New Malden, Hatfield, Milton Keynes and the two stores in both Wembley and Borehamwood.

Other features which will be available to UK consumers as part of the trial include the ability to watch 3D film trailers projected onto a Clubcard and the chance to play with virtual Lego such as a Pirates of the Caribbean model.

Tesco says that it chose Kishino to develop its AR offering because the firm was able to accommodate over 20,000 models on its platform, compared to the 100 models offered by its nearest competitor.

Richard Corps, Kishino Managing Director, said: “Integrating augmented reality into retail will take the technology to much bigger audiences than ever before. Uniquely Kishino can deliver tens of thousands of augmented reality products. This unmatched level of scale is combined with an exciting live viewing experience we know can drive sales.

“Kishino first got involved with Tesco after it was invited to attend the Tesco Technical Showcase, where the attendees were ‘blown away‘ by the potential of enhancing their customer shopping experience by using AR.” 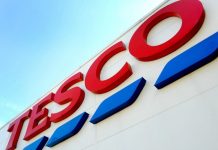