British fashion retailer French Connection has announced to investors today that it is now unlikely to meet its full-year profit targets due to continuing declines in sales.

In the 15 weeks to May 7th 2012 French Connection‘s group revenues declined 9.5 per cent compared to the same period last year, due to poor sales volumes in its UK and European operations.

Like-for-like sales slid 12 per cent during the period in Europe and the UK, with trading proving particularly difficult in the retailer‘s domestic market, where consumer caution is set to remain over the second half of this year.

The retailer‘s US operations in contrast have become more profitable over the last quarter with revenues growing 11 per cent year-on-year, its wholesale division has been performing in line with expectations albeit below last year‘s sales levels, and growth has also been achieved online.

Sluggish demand in its core markets is undermining these successes however and in March the business launched a strategy review to try an resuscitate its sickly UK operations.

In a statement released today, French Connection said:”We have appointed external specialist advisors to support management in this process and are working quickly towards delivering both short-term gains and long-term strategies to improve the sales densities and gross margins within our retail portfolio.

Losses of £8.2 million in just one year have already led to the retailer to announce the closure of 14 of its UK stores, including ones in prime locations such as the Bluewater and Lakeside shopping centres.

This time last year French Connection was enjoying somewhat of a revival as its sales resiliently grew against a backdrop of shrinking spending on the high street, and in September it announced its first profit-before-tax for the first half of its financial accounting period since 2008.

A difficult Christmas period offset any gains during the first half of the year however and over the last few months trading has continued to drop.

French Connection currently has net cash reserves of £11.3 million however this surplus has shrunk considerably since last year when it reported £18.5 million on its balance sheet. 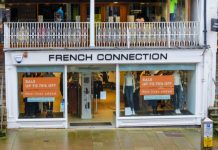