Taking into account 180 of the world‘s major cities, the group‘s research discovered that currently 29.6 million sq m is undertaking new development, the equivalent of all the retail space left available in France, the UK and Germany combined.

Out of the 180 cities measured in the survey, half of those are shopping centres being constructed in China.

The hope of penetrating a middle class market has seen retailers expand to the reaches of Asia and other parts of the BRIC (Brazil, Russia, India and China).

“It is our view that shopping centre development activity is currently at an all time high, with growing middle class populations, particularly in the BRIC markets, fuelling this demand.

“The shopping centre concept, once the preserve of the western world, is becoming ubiquitous.

“China has led the way in recent years and with huge opportunities still existing in its secondary cities, it is likely to remain the most active development market over coming years.

“However, the upsurge in development is also evident in Turkey, Mexico, Malaysia and Vietnam among others.”

Comparatively, in Europe only 15 out of the 96 cities in the survey were undergoing a new shopping development site due to the poor economy and lack of retail units of space.

London, with the completion of Westfield Stratford City, was the only city in Europe where more than 100,000 sq m was completed.

Last week, traveller services firm Global Blue reported that Chinese tourists have increased their monthly spend in the UK from £666 to £744 in just five months, accounting for 18 per cent of total sales by international shoppers.

Moss added: “While the low level of shopping centre development in western Europe reflects the maturity of the market, a difficult economic climate and the fact there is simply too much retail space, it is also true that there is a lack of quality of space in many markets.

“Modern units of the right size, type and in the location that retailers require remain in short supply.

“This suggests that redevelopment of existing retail space – whether in shopping centres or high street locations – will remain the focus of development activity over the next few years.” 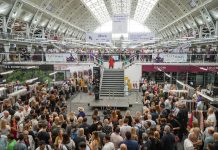