Department store chain John Lewis has weathered the storm over the last week to give an overall 15.3 per cent year-on-year rise in total sales, it was announced today.

Retail therapy was the cure for shoppers wanting to seek solace after suffering a deluge of rain as all areas in store welcomed an increased footfall for the week ending July 7th 2012.

However, this did not come in the form of fashion purchases which only received a 9.4 per cent lift due to isolated sales in its Babywear, Women‘s Accessories and Beauty departments.

Continuing bad weather saw consumers taking refuge from the downpours and taking to the internet, with sales at jl.com up a massive 45 per cent on the same period in 2011.

Paula Nickolds Buying Director of Home at John Lewis, feels that despite the store weathering a week of rain, staff must now focus on taking advantage of the imminent arrival of the summer sport highlights on our doorstep.

“The summer months are likely to require a flexible and reactive approach to trading as the combination of unpredictable weather and a huge influx of tourists could present numerous opportunities,” Nickolds said.

“With only two weeks to go until the London 2012 Opening Ceremony, I‘d encourage all Partners to be proactive in helping the business make the most of this unique time ahead.” 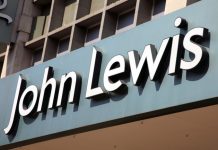