Following the success of a pilot launch last August at the One New Change shopping centre in central London and an installation at Bristol‘s Cabot‘s circus in November 2011, the pop-up will be live for one month from today at Birmingham‘s Bullring.

By scanning a bar code via the Ocado ‘On the Go‘ app with their smartphone, customers can buy from a whole host of products on the wall from baked beans to bananas.

Figures for the number of consumers using the app to purchase essentials has been steadily increasing, with 24 per cent of sales for the online grocer being made by mobile devices as of June this year.

Jason Gissing, Ocado Co-Founder, said :“We could not be more excited about bringing our virtual window shopping experience to the Bullring.

“Birmingham has long been Britain‘s Second City, and with so many of our dedicated customers living in the area it makes perfect sense to take our virtual store to their doorstep.”

Visitors to the virtual wall will notice the city‘s local culinary tastes catered for with balti, HP sauce and pork faggots available to be ‘scanned and shopped‘.

According to a British Retail Consortium (BRC) Online Retail Monitor conducted in conjunction with Google released yesterday, searches via tablets and mobile phones soared to 113 per cent year-on-year with total roaming for the sector rising to nine per cent.

Gissing believes that the Bullring is a prime location to bring the virtual shop to the Midlands.

He concluded: “The Bullring shopping centre is such an iconic location, and we can‘t wait to see how much easier this will make the lives of both our existing fans and new customers alike, as they use our innovative service to take away the hassle of the weekly shop – no crowds, no long checkout queues, no heavy bags; this is the future of retail in the UK, and it‘s here right now.” 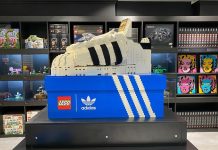