All remaining Comet stores will close today, leaving debts of over £230 million to unsecured creditors, including HM Revenue and Customs (HMRC), unpaid.

49 stores opened their doors for the last time today, all that is left of the 236 which were open when the electronics retailer collapsed into administration last month. Administrators Deloitte originally hoped to sell the business in its entirety, attracting interest from 118 parties, but the four offers which they did receive fell through or were rejected.

In a report published last night, the administrators said that they were still “in negotiations with a small number of parties” regarding the sale of the business. The report also revealed that secured creditors, including OpCapita‘s private equity firm Hailey Acquisitions, will receive only £52 million of the £145 million which they are owed.

But the situation is even worse for the unsecured creditors, who are unlikely to receive any of the £232.9 million which they are owed.

This includes HMRC, who are owed £26.2 million in unpaid taxes, as well as landlords and manufacturers.

These employees are owed £23.2 million in redundancy money, which will be paid by the government‘s Redundancy Payments Service (RPS).

The loss of Comet, which was the UK‘s second largest electronics retailer, will be a blow for the high street. 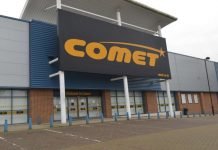