Sales of electricals and home technology soared 29.9 per cent in the week to February 16th 2013 and also helped boost online sales, which climbed 30.4 per cent on the same period last year.

For stores, Chester saw sales jump 24.9 per cent, while Swindon and Edinburgh reported a rise of 14.4 per cent and 11.2 per cent respectively and 18 of John Lewis‘ 35 branches saw sales increases on last year.

Sunday February 10th was the retailer‘s best performing day as sales leapt 16 per cent, finishing the week on Saturday 16th with sales up 11.5 per cent.

Fashion performed well during the week, up two per cent overall as menswear and sport reported a rise of 10.5 per cent.

Men‘s own brand sales increased 34.4 per cent while men‘s accessories saw a 15.3 per cent rise and men‘s shoes sales went up 13.4 per cent.

However, home sales declined 1.9 per cent on last year despite growing sales of bed linen and upholstery though David Barford, Director of Selling Operations, Region B at John Lewis, said that the retailer is well-placed to improve this performance.

He commented: “Looking ahead we have all to play for as new season stock arrives and the new spring/summer Furniture assortments are now in place.”

John Lewis also announced today a partnersrhip with delivery service provider CollectPlus which will allow shoppers to return online purchases for free via a network of over 5,000 local convenience stores, newsagents and petrol stations.

“Orders using Click & Collect have nearly doubled over the past year, and accounted for an impressive 35 per cent of online sales over the Christmas period, so we know that customers are looking for ever-more convenient ways of shopping with us,” explained John Lewis‘ Head of Omnichannel Development Karen Dracou.

“By partnering with CollectPlus, we can extend our existing reach of John Lewis and Waitrose collection points to a wider geographical base, providing an even more convenient way for our customers to shop.”

Meanwhile, supermarket Waitrose grew 12.4 per cent on last year thanks to shopper interest in Shrove Tuesday and Valentine‘s Day as celebratory confectionery sales jumped 53 per cent.

Bouquet sales climbed 24 per cent while sales of champagne were up 13 per cent and the grocer expects Easter to further drive sales as customers are already showing interest in related products. 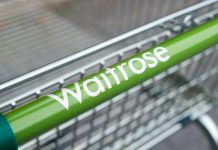 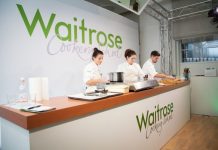