Fashion brand Ted Baker says early trading has been positive as the group continued its expansion into international markets.

“Underlying our strategy is an emphasis on design, product quality and attention to detail, which is delivered by the passion, commitment and dedication of our teams, licence partners and wholesale customers,” said David Bernstein, Non-Executive Chairman, Ted Baker.

The brand, which has 341 stores and concessions worldwide, opened two new stores in the first half of the year including an outlet in Shanghai, China. The group, which increased wholesales sales by 33.4 per cent to £33.2m in H1, has performed well in comparison to rivals French Connection who have struggled to maintain market share.

He said: “(The latest set of results) demonstrate the ability of collections to pique consumer interest and stimulate spending. Products are always on trend with many having a unique twist that is distinctly Ted Baker; this helps to differentiate from competitors, insulating against discounting and giving Ted Baker something of a destination status.”

Ted Baker is moving into the Middle East, with store openings in Beirut, Kuwait, Abu Dhabi and Dubai planned. 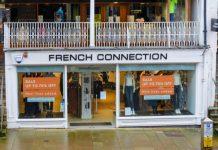