With a record breaking $6.43bn predicted to be spent online in the US across the Thanksgiving period in the US, UK retailers should ensure their supply chains can handle a spike in demand.

Black Friday has long been established as a traditional sales bonanza in the US, and is predicted to see $2.48bn spent online this year, up by 28 per cent.

The American tradition has been an increasingly popular import in the UK, with leading retailers including Amazon, Argos and John Lewis offering sales both online and in-store. Amazon UK reported a record-breaking 4 million sales on Black Friday last year, topped by 4.1 million on Cyber Monday, while Tesco and John Lewis saw online sales jump by 114 per cent and 300 per cent respectively. Asda even saw fights break out in-store as customers scrambled for discounted electrical goods.

“UK retailers are already bracing their logistics operations to handle the Christmas rush, which can see as much as 70 per cent of yearly sales volumes achieved in the last two weeks of December.” , says Venkata V, Global Practice Head – Retail Solutions, IT services company ITC Infotech, who works with some of the top retailers around the globe.

“However, with the US expecting one of the biggest sales periods in history this Thanksgiving, the UK should be prepared to see a spike in demand and more strain on their logistics. Even retailers not offering specific Black Friday discounts themselves can expect more demand as shoppers are inspired to hunt for Christmas bargains.”

The rapid escalation in demand created by sales events like Black Friday can be extremely lucrative, but also cause havoc on unprepared supply chains, as demonstrated by China‘s recent “Single‘s Day” event. The country‘s biggest sales event saw the e-commerce leader Alibaba rake in sales of over £9 billion, but the day has previously slowed down delivery times from two days to over a week.

Marketing, production and logistics teams should work closely together to make sure their operation can handle increased demand today, especially as they are likely to already be stretched by the Christmas period. Flexible retailers have a strong opportunity to capitalise on the sales event by reacting to demand and adjusting their pricing strategy on the fly, increasing and lowering prices as needed.

The increased complexity of omni-channel retail has made the supply chain more challenging, also presents an opportunity for well-prepared operations. Capacity should be available to quickly move stock for the most popular products around to meet increased demand online or in particular stores.

While Black Friday will always be a US-centric sales event, UK retailers should be prepared to capitalise on the waves it is beginning to make over here. With logistics operations pushed ahead of December sales, nothing should be left to chance.

However following an expected online shopping frenzy starting today on Black Friday and continuing beyond Cyber Monday, some consumers may regret their impulse buys. According to a survey earlier this month by SAS and Conlumino, almost three in four shoppers say online purchases should be allowed to be returned in store. This pattern could become known as ‘Return & Run‘ where they simply return unwanted items or ‘Shop & Drop‘ where they make new purchases at the same time as returning unwanted goods.

With shoppers becoming ever more unpredictable in their buying and returns behaviour, Black Friday can no longer guarantee a healthy profit for retailers, even with the appeal of bargains, same day deliveries and ‘Click & Collect‘ services. As well as wanting to return online items in store, some shoppers are also experiencing ‘promotion fatigue‘ – more than two-thirds of consumers in the survey think discounting has lost its impact. 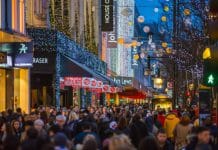