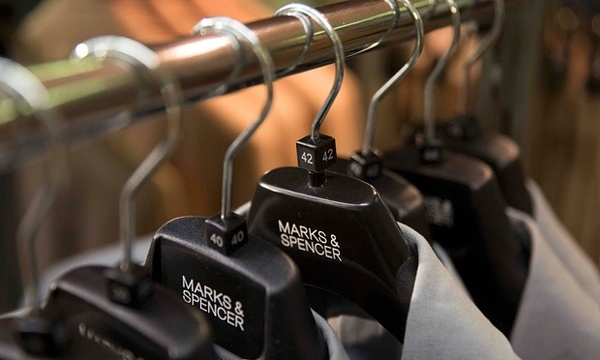 Just as M&S seems like it‘s moving forward, its general merchandise category has forced it to take a step back. Sales from this division, which includes clothing and home furnishings, fell 0.4% in the last quarter.

It‘s almost a tale of two businesses for the British retailer, whose food category did “very well in a difficult market,” rising 0.3% in like-for-like sales.

Marks and Spencer was also helped by a 38.7% jump in online sales, after a sharp drop at the beginning of last year following a site re-launch and problems with its new distribution centre.

Chief Exec Marc Bolland said: “We continue to make progress against our key priorities… In general merchandise, sales were broadly level on last year and we are on track to deliver the planned increase in gross margin. M&S.com performance was very strong, with customers appreciating all the improvements to our website.”

M&S said that despite a “challenging and promotional quarter” it was on track to meet its target this year of increasing the gross margin.

In other news, the department store chain has expanded its free click & collect service to over 100 of its Simply Food franchise stores, just days after rival retailer John Lewis announced it would start charging customers £2 for deliveries under £30, referring to its current model as “unsustainable”.

The expansion of the in-store collection service for goods ordered online would enable customers to collect their orders at locations including railway stations, airports, motorway service stations and hospitals, M&S said yesterday.

“Store collection is incredibly popular, with over half of orders picked up from our stores,” said David Walmsley, Director of M&S.com.

“By extending the service to locations such as railways and service stations, which may form part of customers’ daily journey, we hope to make it even easier and more convenient for them to shop with M&S.”