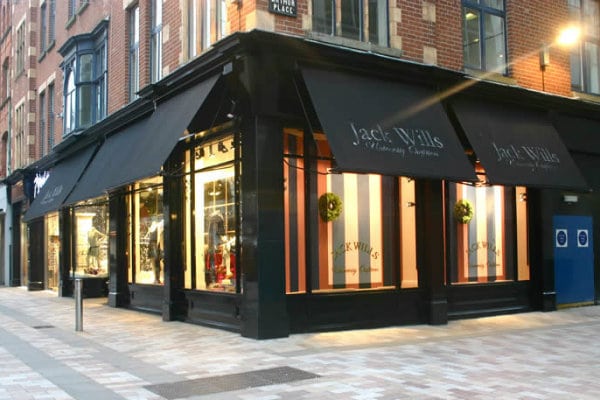 Jack Wills grew turnover by 2.1% to £132m in the year ending 1 February 2015, representing the 16th consecutive year of growth.

The preppy fashion retailer opened 9 new stories during the year, bringing the total of company owned stores to 79 and said that it sees “significant growth opportunities across the Asian market”.

In September 2014, the Jack Wills‘ distribution operations were outsourced to an external logistics partner as part of a strategy to improve the operations of the business. There were some teething problems causing short-term operational issues. but in a statement the company said everything was now running smoothly and serving needs for the medium term. This had a negative impact on the FY15 results at year end but has been treated as an exceptional item.

Following a detailed review of Jack Wills‘ growth opportunities in August, the British brand announced its decision not to pursue an IPO in the near term. Subsequently, Wendy Becker stepped down from the business and was replaced by Founder, Peter Williams as Chief Executive.

The company also added a new Head of E-commerce to its senior management team to oversee the delivery of strategic priorities.

Commenting on these results, Williams said he was  “pleased with the continued progress we have made during the year, particularly with our international expansion into new markets across Asia.

The fact we recorded our sixteenth consecutive year of growth in a year when we had to deal with significant disruption in our supply chain is a tribute to the strength of the Jack Wills brand, and we continue to see further growth opportunities in the UK and internationally. During the last year we made a number of changes to our central operations and are confident that we now have the right partners in place to further develop the brand for the longer term.”