This marks the end of the second full year under Peter Ruis, who became CEO of the upmarket retailer in September 2013. Formerly an Executive and Buying Director at John Lewis, Ruis said he was “pretty chuffed” at the results.

“We were up on the year before, trading at full price…”

Indeed, the retailer‘s prices stayed at “full price” even during the Black Friday shopping weekend as, according to Jigsaw, its clothes “stand for something.”

Ruis was appointed to the chain two years after the parent company Robinson Webster Holdings posted pre-tax losses of over £21.2m. He was credited with vastly improving John Lewis‘ technology, fashion and home offering, and has since had great success in turning Jigsaw around.

Jigsaw operates across 70 stores, including Bluebird on King‘s Road in Chelsea. It is owned by founder John Robinson, as well as 13 senior members of staff, who are all expected to seek a stock market listing within the next three years. 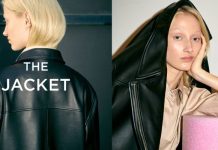 Vagabond ventures into clothing with ‘The Jacket’