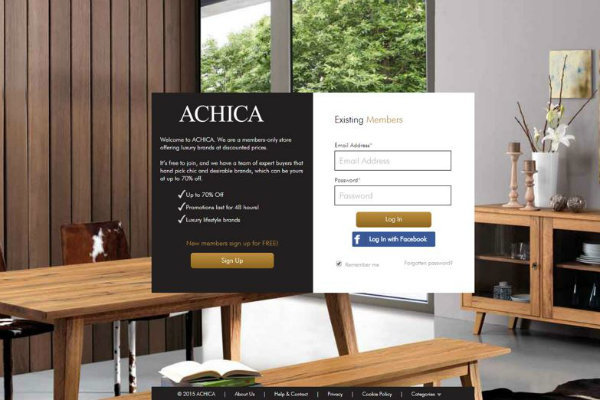 Worldstores threw Achica a lifeline when it purchased the luxury e-tailer for an undisclosed sum around the beginning of December.

Worldstores was founded in 2008 by search marketing specialists Joe Murray and Richard Tucker. The duo saw a gap in the market for bulky furniture that could be delivered straight to consumers‘ doors. Since its inception the business has grown to house over 750,000 product lines through own brands Modern.co.uk and flash sale e-tailer Casafina.

Achica was launched in the same year by a team which includes Quentin Griffiths, Asos Co-founder, and Steve Robinson, the former Head of Tesco Direct. Robinson joined the members-only homewares retailer in 2013 as COO before moving up the ranks to Chief Exec last year.

As Chief Operating Officer, Robinson was focused on improving customers‘ experience on the site. When he transitioned to CEO, overhauling it became one of his top priorities. He believed there were opportunities to be seized through the site‘s granular access to customer data.

Earlier this year Robinson put a replatform of the website in place. But it came with great problems: internal glitches compromised data integrity, resulting in the loss of sales and customers. It is understood that several redundancies were made earlier this year.

Because Achica shares the same early backer as Worldstores, Balderton capital, a deal was likely made around the table. The venture fund company‘s interests lie heavily in the tech sector and Achica‘s business model is well-established. Balderton‘s previous investments include Yoox before it merged with Net-a-Porter, and The Hut Group.

For Worldstores, the acquisition of Achica serves to strengthen its portfolio. Last year the group bought parent and child retailer Kiddicare, just two months after private equity firm Endless Capital had purchased it for £2m from Morrisons. At the time, Kiddicare was shifting the majority of its business to online, foregoing all standalone stores save one in Peterborough.

Business is booming for Worldstores, which was boosted by a £25m round of funding led by Goldman Sachs, earlier this year. This money is being used to build its own fulfilment fleet, with the intent to offer next-day delivery for large items within a one-hour window, seven days a week. Money is also being ploughed into improving the technology and growing Casafina‘s membership platform.

Worldstores now employs over 350 people and a source close to the business has confirmed the relocation of its Twickenham head office to Waterloo sometime next year.