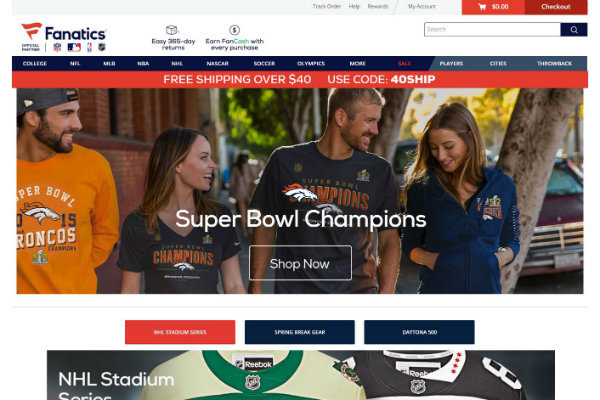 Kitbag‘s new owner Fanatics has outlined a plan for expansion that threatens to make the”¯etailer”¯a major”¯source of competition in the market.

Findel sold Kitbag for £11.55m earlier this month after”¯a long period of negotiation which”¯included”¯attempts by Sports Direct owner Mike Ashley to disrupt the deal. With Fanatics behind it, the sporting goods”¯etailer”¯has much greater potential for expansion.”¯

“Fanatics passed $1bn revenues last year, which makes us the largest company in the sales of license sports merchandise, but we‘ve done that without having a big international presence or a big football business,” said CEO Doug Mack.”¯

“We always knew that to grow and continue our market leadership, we needed to address both those aspects of our strategy, so Kitbag has a very attractive option in that there are not many $100m plus pure plan ecommerce companies in that area that could immediately give us global scale and talent with 500 employees.”¯

Kitbag also has relationships with 25 clubs in sporting”¯associations around Europe including four of the top 10 European football clubs, we well as rugby, tennis and Formula One, so it was a very attractive way to accelerate globally.””¯

In discussing”¯Kitbag Mack also emphasised the need for technological investment. Around $80m is being invested in technology at Fanatics,”¯some”¯of”¯which will go towards improving Kitbag‘s capabilities.”¯

“We‘ve been speaking to Kitbag staff, and one of the things we have shared with the teams, is that they are part of a technology company and nobody can do their job optimally in a company like this without access to great technology and great data,” Mack continued.”¯

“We fully expect the Kitbag team to access the best aspect of the technology, whether it‘s for marketing or whether it‘s for decision making, or search on the shopping experience, and one of the major benefactors will be Kitbag‘s partners who now get a company with a global scale and significantly higher investment levels in these key areas.”