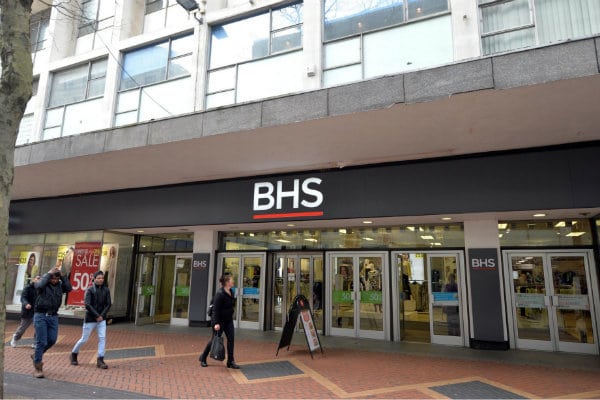 It’s feared that BHS is just hours away from collapsing, putting around 11,000 jobs at risk.

A statement is expected to be made later about the company’s future.

The owner of BHS warned staff on Friday that the business would be calling in administrators on Monday after failing to agree a last-minute deal to keep the business going.

In a letter to its 11,000 employees on Sunday evening, the largest shareholder in BHS, Dominic Chappell, said: “It is with a deep heart that I have to report, despite a massive effort from the team, we have been unable to secure a funder or a trade sale.”

It is understood that restructuring firm Duff & Phelps will likely be named as the administrator, and is expected to try to find a buyer for the business as a going concern. Chappell indicated in the letter that staff wages for this month would be paid by the administrators.

“Today‘s failure of BHS brings to a close a long run period of decline which has seen the chain fall out of favour with British shoppers thanks to its failure to respond to changing tastes and the intensification of competition on the high street,” comments Neil Saunders, CEO of retail consultancy Conlumino.

“Fifteen years ago in 2000, BHS attracted some 13.4% of all clothing shoppers through its doors.

Such a decline reflects the fact that even to its core, older audience BHS has become something of an irrelevance. The chain‘s ratings on price, quality, value, and range have all fallen thanks to the rise of more compelling alternatives.

Primark and the grocers have dominated attention for more basic product, while chains like TKMaxx have allowed more aspirational shoppers a chance to buy fashionable branded product at low price points.

Even in the middle part of the market, the reinvention of ranges at Debenhams and M&S – while not perfect – have left BHS‘s range looking increasingly dated and dreary.

All of this has been exacerbated by a store estate that, outside of flagship shops, looks tired and dull. This has meant that despite being in high footfall locations, stores have increasingly failed to draw people in.

Against this backdrop the business has become uneconomic and unprofitable, something exacerbated by the high levels of debt including those from pension liabilities.

A firm that has relevance but lacks a sound financial footing has a chance of attracting investment. Sadly, BHS has neither.”

“It is a firm that is out of step with modern consumer tastes, which lacks the finances to enact the major changes required. As such, it is now a retailer that is out of time,” he added.