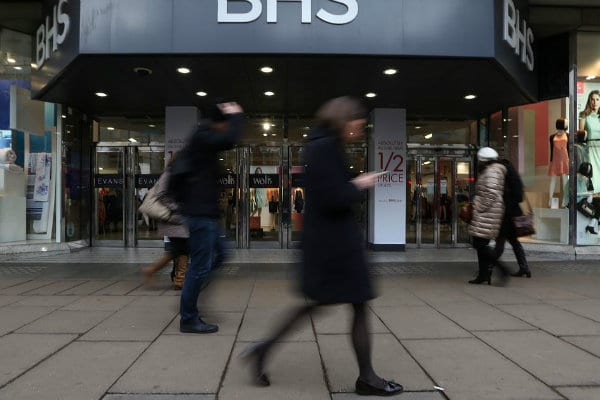 However you feel about Sir Philip Green‘s handling of BHS before its sale to Retail Acquisitions for £1 in March 2015 or the inexperience and relative naivety of the brand‘s new owners, these were not sole reasons for the demise of the British retail brand.

Of course questions will continue to be asked about how an 88-year-old high-street business, responsible for 11,000 people‘s livelihoods and retirement plans could go from a £5m surplus pension pot to a £571m deficit in just 16 years. And so they should.

But that doesn‘t disguise the fact that, like Woolworths before them, BHS failed to maintain relevancy and meaningfulness in a changing consumer world.

BHS was founded in 1928 by American entrepreneurs who wanted to follow the successful model set by Woolworths. They didn‘t want to go into direct competition however so set their highest priced items at a shilling.

The first store opened in Brixton but a year later the offer had already changed and the price limit lifted to five shillings to allow the business to offer more goods. Some may say that‘s opportunistic, but it may have been indicative of what was to come.

A brand that fails to maintain its purpose or doesn‘t communicate its value proposition to the consumer is always more likely to fail.

Consider the affordable yet fast fashion at Primark, the high quality, sexy food at Marks & Spencer, accessible home offerings at Next, celebrity endorsed labels at H&M and the unbeatable price promise at John Lewis. We intrinsically know how these retail brands contribute to our daily lives. We trust their promises and allow them to enrich our sense of worth, family and community.

Now consider BHS. What did it stand for? What meaning did it add? The fact it was called “British Home Stores” would perhaps carry more weight nowadays if you were to look at the brand afresh; “a British brand celebrating the best of British retail” perhaps. But evidently not.

It wasn‘t as though BHS‘s 164 stores were affected by economic shifts within its supply chain. The price of fuel, milk or steel had no bearing on operational or logistical costs.

While Retail Acquisitions was forced to re-mortgage the flagship store on London‘s Oxford Street before its eventual sale for £20m under the asking price, plans announced last year to regenerate the rest of the store portfolio in the face of high-street rent rises would have simply been a case of papering over the cracks at the heart of the brand itself.

BHS failed because it lacked meaning and purpose. Without these two elements, consumers begin to lose trust and relevancy in a brand.

All brands need to understand what genuine value they can add and create for an audience, and without this insight and consumer analysis, every decision made cuts deeper into brand health.

It affects everything – from the overall business objectives to store location, digital ambition, stock, how staff are treated and customers are communicated to.

Instilling brand meaning holds a management team to account and provides clarity to every decision made. If it doesn‘t directly benefit how the consumer engages with your brand on a daily basis, it‘s likely to be the wrong decision.

When a brand is meaningful, the workforce is galvanised and there‘s open, honest and transparent communication from the top down. Meaningfulness and relevancy inspires investment and confidence. It instills acceptance and loyalty within communities and households and provides continued reasons to trust in its products and services.

So why did BHS really fail?

Sadly, the writing was on the wall the day it lost its meaning in consumer‘s lives and its wider role on the British high street.